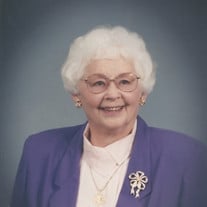 Alta Plumb Slack died peacefully in her home on December 21, 2021, at the age of 103. She was a life-long learner, had a will of steel and a strong faith in Jesus Christ, which enabled her to live a long and healthy life. Alta Amanda was born to Florence Hicks Plumb and Harold Edgar Plumb on June 9, 1918 on their dairy farm homestead in Whitingham, Vermont. She was the seventh of 12 children, the first girl after her six older brothers. She had three younger sisters and two younger brothers. She was proud to be in the National Society for Daughters of the American Revolution as her three times Great Grandfather George Plumb fought in the Revolutionary War. As a child she did a lot of sewing and a dress she made won a State 4-H Contest; and in Junior High another dress she made won first prize in the state of Vermont. In 1936 she graduated co-valedictorian from Springfield High School with a DAR Citizenship Medal and a 4-H Scholarship. She attended University of Vermont where she was a member of Alpha Chi Omega. Alta graduated in 1940 with a BS in Commerce and Economics, Phi Betta Kappa. While at University of Vermont she met Ransom Orcutt Slack and they were married December 29, 1939 in Springfield. They were married 39 years until his death in 1971. Alta and Ransom started their family in Burlington, Vermont and after Ransom returned from service in the Pacific on the USS Sigsbee during WWII, they moved to Montana, and then Columbus, Ohio. A few years later they settled in Marietta, Ohio, where she raised four children and resided for nearly 70 years. Wherever she called home, Alta was always active in her church choir, local theatre, and various community organizations. In Marietta, she was involved in the AAUW, Church Choir, Handbell Choir, League of Women Voters, Messiah Society, Mid-Ohio Valley Symphony Society, Mid-Ohio Chapter of National Society of Arts & Letters, and Friends of the Library. Alta over the years was a Sunday School Teacher at First Presbyterian; she performed in over 35 productions with the Mid-Ohio Valley Players; and she was a Teacher’s Aide at Phillips Elementary School. In retirement, Alta enjoyed traveling to Elder hostels, and she continued to expand her education including attending many courses at the Learning in Retirement Institute. Alta played in a regular bridge club up through her 100th birthday, loved to read, do crossword puzzles, played a mean game of scrabble and was a member of St. Luke’s Lutheran Church. Alta is preceded in death by her husband Ransom Slack, her daughters Janet Slack and Judy Harkness, and survived by her children Ransom Slack (Jean Britton), Rodney Slack (Diana Flannery), and Jennifer Stone (Jon Stone), grandchildren Loreleen Britton, Janet Harkness, Marty Jo McGrath, Kendra Slack, Ransom and Riley Stone, and great grandchildren Laura, Elizabeth, and Paul McGrath, Adam, Jackson, and Callum Smith. Alta will be laid to rest next to her husband in the Oak Grove Cemetery in Marietta, Ohio. A memorial is not yet planned. In lieu of flowers, donations can be made in her name to the O’Neill Senior Center. https://oneillcenter.com/opportunities/giving/tribute-donations/. The Marietta Chapel of Cawley & Peoples Funeral Home is honored to serve Alta’s family and offers online condolences as well as many other resources by visiting their website, CawleyandPeoples.com.

Alta Plumb Slack died peacefully in her home on December 21, 2021, at the age of 103. She was a life-long learner, had a will of steel and a strong faith in Jesus Christ, which enabled her to live a long and healthy life. Alta Amanda was... View Obituary & Service Information

The family of Alta Amanda Slack created this Life Tributes page to make it easy to share your memories.

Alta Plumb Slack died peacefully in her home on December 21,...

Send flowers to the Slack family.