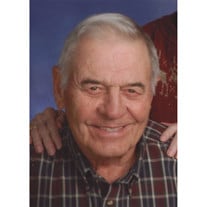 Anthony (Tony) A. Tornes, 86, of Marietta, Ohio, died on Thursday, November 15, 2018, at his home, surrounded by his loving family. He was born in Marietta on October 3, 1932 to the late Raymond and Caroline Blanche Lang Tornes. Tony graduated from Lowell High School, class of 1950, had been a self employed farmer and had a dairy for many years. He and his brother Harold were partners in farming until Harold's death in 1992. They also ran a 10 gallon can milk route for Broughton's Dairy for many years. Tony worked at the Marietta Livestock Market on Thursdays until it closed, and loved to attend livestock auctions until his ill health prevented it. He was also a school bus driver for Fort Frye Schools for 15 years. Tony was a member of St. John the Baptist Catholic Church, the Holy Name Society, Knights of Columbus, and the Churchtown Senior Citizens. He had been a 4-H advisor and was a member of the Watertown Volunteer Fire Department. Tony was also a member of OAPSE and SERS. He enjoyed farming, especially raising cattle, gardening and fishing. He found great joy in his granddaughters. He is survived by his wife Donna Jean Smith Tornes, whom he married on August 1, 1959; three children, Jennifer Marie, Louis A. (Betsy) and Sue Tornes all of Marietta; three granddaughters, Torrey Notestine of Orlando, FL, Emma Tornes and Jacqueline Tornes; and one step-granddaughter, Morgan West (Matt), all of Marietta. He is also survived by three sisters, Regina Weinheimer, Ella Mae Young (Dewey Schau) and Ruth Morgan (Leroy); a brother in law, Gary Smith (Mary Lou) of Harrison, OH; and sisters in law, Ramona Tornes and Laura Biedel. He was preceded in death by a brother, Harold Tornes; sisters in law, Regina Tornes and Frances Smith; and brothers in law, Dick Young, Jack Biedel and William Smith; and also a special family friend, Leroy Marshall. Funeral Liturgy with Mass will be held at 10:00 a.m. on Monday, November 19, 2018 at St. John the Baptist Catholic Church, with The Revs. Timothy Davison and Robert Kawa con-celebrating. Burial will follow in St. John Cemetery. The family will greet friends on Sunday from 2 to 8 p.m. at the Marietta Chapel of Cawley & Peoples Funeral Home, with a Vigil service at 4:00 p.m. A gathering of family and friends will be held at the Knight of Columbus Hall following the services, to which all are invited. Donations may be made to Marietta Home Health and Hospice or to St. John School Foundation. The family would like to thank his special caregiver, Wilma Sams; Marietta Home Health and Hospice, O'Neill Senior Center Day Care and their staffs for their loving and compassionate care.

Anthony (Tony) A. Tornes, 86, of Marietta, Ohio, died on Thursday, November 15, 2018, at his home, surrounded by his loving family. He was born in Marietta on October 3, 1932 to the late Raymond and Caroline Blanche Lang Tornes. Tony graduated... View Obituary & Service Information

The family of Anthony Alfred Tornes created this Life Tributes page to make it easy to share your memories.

Send flowers to the Tornes family.