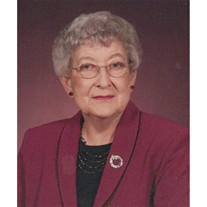 Bernadine Richardson, 86, of Barlow, Ohio, passed away, with loving family by her side, on Sunday, January 10, 2021, at Harmar Place in Marietta, Ohio. She was born on October 6, 1934, an only child to Ernest P. and Rosa O. Price Parsons, in a tiny farm house in the country in Gilmer County, WV. There, she and her parents worked on the farm. Bernadine attended a one room school for the first several years of her education. Upon the family moving to Vienna, WV, where she attended and graduated from Parkersburg High School in 1952. She talked about what an adjustment it was to go from a one room school to a large high school. Bernadine was always academically a very good student. Upon graduating she began her working career at Viscoe Manufacturing in Parkersburg as a secretary. There she met the love of her life, Orie Richardson, who had recently returned home from World War II. After dating a short time, they married on October 14, 1954. They moved to Vincent, Ohio and began a 47 year long marriage and raised two daughters. There they remained and lived in the community and contributed. There were lean and hard times, but we never went hungry or without. She could magically make a meal appear out of nothing, with a lot of love mixed in. Upon Orie's death in January of 2002, Bernadine remained in the community for a total of 63 years. She was a devoted and faithful wife, mother and caregiver to her mother in law, Edna Richardson, until her death in January of 1977. She also took care of her mother, Rosa, for many years in their home. She loved her family with a relentless love; two daughters, Anita Ritchie (Dane) of Belpre, Ohio and Charlene Young (Jonathan) of Charleston, WV; two grandchildren that she adored, Jeremiah McConnell of Vincent, Leah Ray (Travis) of Sydney, IL; and five great grandchildren that she worshipped, Brayden and Taylor McConnell, Addison, Korben and Elcie Ray. The most important thing to Bernadine was her relationship with Jesus. She lived it out on a daily basis. She was a faithful example of that to her family, always willing to listen or talk about the Lord and pray with anyone at any time. Bernadine was very active in her church, Lighthouse Baptist, when she was able. With bible studies, women's ministries, clubs and committees. Always willing to help a neighbor with a meal or to sit with a loved one or someone who is ill and in their last days on Earth, as she often did with many family members. Bernadine loved to be outside. Always had the most beautiful flowers every year, and a garden that would feed the neighborhood, and often did just that. In 1977, Bernadine returned to work at Three Sons Market in Vincent. She remained there until the owner retired and they closed the store. She knew everyone that came into the store, and everyone knew her, she always had a smile on her face. Shortly thereafter, she was hired at Cawley & Peoples Funeral Home in Barlow, when they opened a new location in 1997. She quickly found her calling there. Many times, she stated that was her favorite job of all time. She most definitely had the gift of mercy. She took great pride in showing each family kindness and compassion and letting Jesus shine through. People would often request Bernadine because she had lived in the neighborhood for so long. She truly was in her element during a visitation or service, she had a calming spirit about her, people were drawn to her. Not only at work, but as a wife, mother, grandmother, great grandmother, friend, coworker, and neighbor, she was always willing to lend an ear or shoulder to cry on. Heaven has acquired a treasure in Bernadine and Orie has his sweetheart once again. He has been waiting patiently for her on a bench in heaven. She was preceded in death by both parents, both in laws, devoted husband, many aunts, uncles and other dear family members. With much love, appreciation and affection, we as a family want to thank all the staff, nurses and aides, housekeeping and office staff for the care, compassion and hugs mom received at the Pines, Harmar Place of Marietta and Shrivers Hospice . Angels on Earth! Due to COVID-19 restrictions at her church, private graveside services will be held at Mt. Olivet Cemetery in Parkersburg. A public celebration of life will be held at a later time. Donations may be directed to Shrivers Hospice, P.O. Box 8, Zanesville, Ohio 43702. Cawley & Peoples is honored to serve a friend and coworker, Bernadine and her family and offers online condolences as well as many other resources by visiting their website, CawleyandPeoples.com.

Bernadine Richardson, 86, of Barlow, Ohio, passed away, with loving family by her side, on Sunday, January 10, 2021, at Harmar Place in Marietta, Ohio. She was born on October 6, 1934, an only child to Ernest P. and Rosa O. Price Parsons, in... View Obituary & Service Information

The family of Bernadine Richardson created this Life Tributes page to make it easy to share your memories.

Bernadine Richardson, 86, of Barlow, Ohio, passed away, with...

Send flowers to the Richardson family.