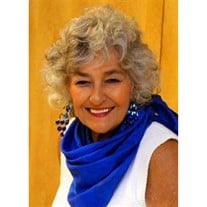 Betty Lou Walden Danner Secoy passed from this life just before noon on Saturday, 11 June 2016, while a patient in Hospice Care at Marietta Memorial Hospital (Ohio), due to complications resulting from a diagnosis of cancer just barely 2 months... View Obituary & Service Information

The family of Betty Walden Danner Secoy created this Life Tributes page to make it easy to share your memories.

Send flowers to the Secoy family.