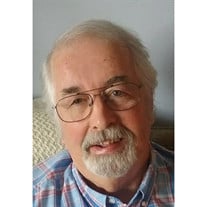 Byron Lee Hoffee, born March 23, 1946 in Marietta, OH, passed away peacefully on September 2, 2017 surrounded by his family. Byron grew up in Athens, OH, where he developed his love of fishing, camping, and the outdoors. Following years of youthful adventure and record-setting fun, he joined the United States Navy in 1965, honorably serving until 1969. Following his military service, he worked at Wright Patterson Air Force Base as an electrician and operator. After falling in love and marrying his wife, Sharon, Byron took one of many life adventures and relocated to Spokane, WA, where he worked as an electrical foreman. Byron left his beloved mountains behind in 1984 and moved his family back to Ohio to be closer to grandparents, taking a job with the Marietta City Schools. In 1995, Byron began working at Washington State Community College in Marietta, largely to help pay for his daughters to go to college. He retired from WSCC in 2012 and spent the last five years loving the retirement life. Those who knew Byron, and those who just met him, heard countless stories about his life and his life experiences, most especially those about his family. Byron had a deep love for his wife, children, and grandchildren. He had an infectious smile and laughter, and he was the "go to" person who had all of the answers to anyone's question. A lover of life, he enjoyed taking trips to Put-in-Bay, traveling to new places, spending summers on the river, singing late-night karaoke, and watching his children and grandchildren play sports. Byron was a risk-taking, fun-haver who loved his dog Tipper and thought every day should include ice cream. He was a member of the Marietta Boat Club, Elks, and local Moose lodge. Byron was preceded in death by his parents, Christine Dorsey Hendershot and Thomas Hendershot. He is survived by his loving wife of 41 years, Sharon Hoffee; his five children, Micki Hoffee, Doug Johnson (Tara), Carissa Anderson (Seann), Alesha Mendez (Daniel), and Tasha Hoffee (Andrew); eight grandchildren, Logan, Casey, Alaena/Alec, Wylie, Coletyn, Zane, Brody, and Evan; his sister, Cheryl Hoffee; step-brother, Jay Patrick Hendershot (Linda); brothers-in-law, Larry Joseph (Kay) and Vernon Joseph; and countless friends and beloved boat club buddies. Abiding with his wishes, he has been cremated and memorial services will be held at 6 p.m. on Wednesday, September 6, 2017 at the Marietta Chapel of Cawley & Peoples Funeral Home, with Patricia Peoples officiating. Full military honors will be observed as well. Family will greet friends from 3 to 6 p.m. that day at the funeral home. During the service, family and friends will be welcome to share their favorite Byron stories. Following the service, family and friends are invited to celebrate his life at the Marietta Boat Club. In lieu of flowers, the family asks that donations be made in his honor to the Humane Society of the Ohio Valley, P.O. Box 5, Marietta, Ohio 45750.

Byron Lee Hoffee, born March 23, 1946 in Marietta, OH, passed away peacefully on September 2, 2017 surrounded by his family. Byron grew up in Athens, OH, where he developed his love of fishing, camping, and the outdoors. Following years of youthful... View Obituary & Service Information

The family of Byron Lee Hoffee created this Life Tributes page to make it easy to share your memories.

Send flowers to the Hoffee family.