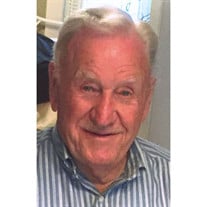 Cecil C. Pottmeyer, 85, of Marietta, passed away on Saturday, December 10, 2016, at Riverside Methodist Hospital in Columbus, following complications from surgeries. He was born April 10, 1931 in Lowell to Helen and Ralph Pottmeyer. Cecil was a member of the Third Armor Division during the Korean War. He was a tank commander on the front lines. After 18 months, he was promoted to tech sergeant and received the Purple Heart and other medals. Cecil was a member of the VFW and American Legion. Following his return from Korea, he was a successful car businessman for over 60 years. Cecil had the Dodge and Toyota dealership for many years, and then switched to used vehicles, having many locations across the area. Cecil is survived by his wife of 53 years, Janet Vandine Pottmeyer and their three children, Angela Pottmeyer of Nolensville, TN, Amy Jo Miracle (Sam) of Marietta and Rod Pottmeyer (Shannon) of Brentwood, TN; seven grandchildren, Wesley and Mason Thieman, Jocelyn and Wyatt Miracle and Taylor, Olivia and Brooke Pottmeyer; three sisters, Anna Mae Strahler, Patti Carr and Margie Chrissan; brothers, John Pottmeyer (Sharon), Larry Pottmeyer (Linda), Gary Pottmeyer (Denise), close family friend, Patrick Clark, and Cecil's dog, Willie. He was preceded in death by brothers, Ralph, Joseph, Eugene and Robert Pottmeyer, and a grandchild, Colby Miracle. There will be a Memorial Mass at the Basilica on Saturday, January 7, 2017, at 11:00 a.m. The family will greet friends on Friday, January 6, 2017 from 5:00 to 8:00 p.m. at the Marietta Chapel of Cawley & Peoples Funeral Home. Following the mass, there will be a celebration of life from 1:00 to 5:00 p.m. at the Boathouse Restaurant. Donations may be made to the Boys and Girls Club, 136 Front St., Marietta, OH 45750.

Cecil C. Pottmeyer, 85, of Marietta, passed away on Saturday, December 10, 2016, at Riverside Methodist Hospital in Columbus, following complications from surgeries. He was born April 10, 1931 in Lowell to Helen and Ralph Pottmeyer. Cecil was... View Obituary & Service Information

The family of Cecil C Pottmeyer created this Life Tributes page to make it easy to share your memories.

Cecil C. Pottmeyer, 85, of Marietta, passed away on Saturday,...