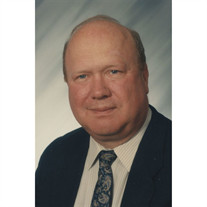 Charles McMaster Eesley, 68, Lowell, died Thursday afternoon, November 26, 2015 in Marietta. Born February 17, 1947 in Columbus, OH, he was a son of the late Wilbur C. and Margaret McMaster Eesley. Charles was a Vietnam veteran, having served with the US Army from 1969-1971, and was a member of American Legion Post 64. He received his Bachelor's degree in economics from Marietta College. Charles had worked in sales and human resources at Sears before becoming a stock broker for The Ohio Company, and later Hazlett, Burt & Watson. Charles was an active, long-standing member of First Congregational United Church of Christ, where he served on boards and helped manage the church's endowment funds. He enjoyed studying the Civil War and military strategy. Charlie was a staunch Republican, and believed that voting is a privilege of every citizen and is important to effect change and ensure the future of the nation. Charles is survived by his wife, Diana Hoffer Eesley, whom he married January 9, 1999; his son, Charles E. Eesley, Ph. D., (fiancé JoJo), of Stanford, CA, and his mother, Terrie Bain, of Marietta; three sisters, Jeanne Kamiab (Joe), of Cleveland, Anne Eesley, of Muskegon, Michigan, and Margaret Eesley, of Kent; nieces Stephanie Mullin (Stephen), Amena and Nooreen Rubin; and great-nephews Cameron and Harrison Mullin. Funeral services will be held 11:00 am Saturday, December 12, 2015 at the First Congregational Church, with the Rev. Linda Steelman officiating. Full military honors will be observed. The family will greet friends at the church for one hour prior to services. Memorial donations may be directed to the American Diabetes Association, the First Congregational Church Memorial Fund, 318 Front Street, Marietta, OH 45750, or to a charity of the donor's choice. .

The family of Charles McMaster Eesley created this Life Tributes page to make it easy to share your memories.

Send flowers to the Eesley family.