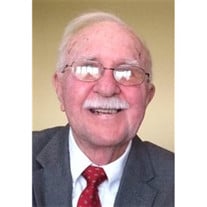 Charles Robert "Chuck" Pannier, 83, of Marietta, Ohio, passed away May 10, 2017 at Brookdale Senior Living in Marietta. Chuck was born on October 21, 1933 in Pittsburgh, PA to the late Kathryn Lobkowitz and Carl O. Pannier. Chuck graduated from Allegheny College with a degree in Economics. He met his wife, Judith Ann Wilber at Allegheny and they were married on October 1, 1954. He enlisted in the Army and served in Korea for three years. He was discharged in 1962. Upon graduating, Chuck and Judy moved to several cities throughout Pennsylvania and New York. They moved to Marietta in 1962 and found their lifetime home. He began Stadium Oil Company and was a petroleum jobber for the remainder of his career, retiring form Englefield Oil Company. Chuck had a strong work ethic he instilled in all his children. He had many and varied interests including first and foremost, golf. Also included were gardening, reading, sailing and renovating our family home. He was quick to share his time with the community he loved by volunteering for many community organizations including the Washington County Food Pantry, Meals on Wheels and the WP Snyder. Upon retirement, he and Judy enjoyed many years of traveling and wintering in Florida. Chuck is survived by his five children, Rob Pannier (Lori) of Ellsworth, Maine, Pete Pannier (Laura) of Dayton, Ohio, Polly Stephens (Howard) of Barlow, Ohio, Pamela Lietz (Tim) of Raleigh, North Carolina, and Penny Beckwith of Lexington, South Carolina; six grandchildren, Andy and Emily Pannier, Sarahkate Stephens, Thomas Beckwith, and Alexander and Lucinda Lietz; his brother, Richard Pannier (Elizabeth); and many nieces and nephews. He was preceded in death by his beloved wife of 61 years on March, 14, 2016 and by his sister, Carol Haller. Funeral services will be held at 3 p.m. on Sunday, May 14, 2017 at the Marietta Chapel of Cawley & Peoples Funeral Home, with Pastor Gordie Deer officiating. Family will greet friends for two hours prior to the service. Memorial contributions may be made to the Marietta Community Foundation to help support the community they loved. The family wishes to thank Bridget, Rhonda and the entire staff at Brookdale for their kind and compassionate care of their father.

The family of Charles Robert Pannier created this Life Tributes page to make it easy to share your memories.

Send flowers to the Pannier family.