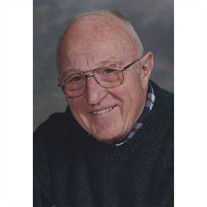 Charles William "{Charlie Bill}" Schob died at his home on January 20, 2018 in Marietta, Ohio at the age of 87. Charles is survived by one son, Andy (wife Candi) Schob of Marietta; one daughter, Betsy (husband Dave) Robinson of Marietta; eight grandchildren, Jason (wife Brittany) Schob, Tiffany Schob, Heidi Schob, Evan Schob, Addie Schob, Zach Robinson, Maureen Robinson, and Ayrn Robinson; and one great-grandchild, Leah Schob. He is preceded in death by his mother and father, Flora Smith and Earl Schob, of Marietta; wife, Betty Jo Vernon Schob of Marietta; 2nd wife, Camille Thompson Schob of Marietta; and sisters, Nancy Barnhouse and Kathryn Callihan of Marietta. Charles was born on August 23, 1930 in Marietta, Ohio to Flora and (former City of Marietta Mayor) Earl Schob. Charlie Bill enjoyed much of his childhood as the "Mayor's Son" and had many stories of his time living on the 800 block of 2nd and 3rd street and playing at the Fairgrounds. He graduated from Marietta High School in 1948 then got his Engineering degree from both Marietta College and Case Western Reserve. He married Betty Jo Vernon in 1961. Charlie worked for B.F. Goodrich as a Plant Engineer for over 25 years had many memories and friends from his time there. He was a member of the Air Force and Air Force Reserves for 17 years as a Pilot and Recruiter and always had stories of flying and his travels throughout the world. With the planning and assistance of Betsy Augustine, Charles and Betty Jo adopted their son Andy and daughter Betsy in the late 1960's. Charlie was a stern disciplinarian father that instilled work ethic and responsibility, but always demonstrated how much he loved his family. Charles was a member of the First Congregational United Church of Christ and enjoyed singing, and many Sunday's you would hear his loud, deep voice singing in the loft with the church choir. He was very skilled in woodworking and enjoyed working in his downstairs workshop. He was an avid New York Yankees fan but sacrificed to take his kids to many of their favorite team's games in Pittsburgh with many memorable family Sunday trips. He was very passionate about volunteering and giving back to the community. He volunteered in the youth baseball and basketball leagues for many years. His passion later in life was the Rotary Club and was a founding member and past president of the Marietta Morning Rotary Club. His personal project was Discovery Garden, where he worked many hours maintaining the garden and it was later named after him by the Rotarians. His volunteering and dedication to the community was recognized when he was named 2014 Gabe Zide Citizen of the Year by the Marietta Chamber of Commerce. Funeral services will be held on Saturday, January 26, 2018 at 11:00 a.m. at First Congregational Church in Marietta, with The Rev. Linda Steelman officiating. Visitation will be on Friday from 2 to 4 and 6 to 8 p.m. at the Marietta Chapel of Cawley & Peoples Funeral Home and for one hour prior to the service at the church on Saturday. In lieu of flowers, the family asks to make donations to the Marietta Morning Rotary Club at https://www.mariettamorningrotaryclub.com/donate/.

Charles William "{Charlie Bill}" Schob died at his home on January 20, 2018 in Marietta, Ohio at the age of 87. Charles is survived by one son, Andy (wife Candi) Schob of Marietta; one daughter, Betsy (husband Dave) Robinson of Marietta; eight... View Obituary & Service Information

The family of Charles William Schob created this Life Tributes page to make it easy to share your memories.

Send flowers to the Schob family.