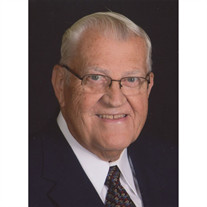 Charles William "Bill" Wesel, age 83, of Marietta, Ohio passed away on November 22, 2015 at his home. He was born in Marietta, Ohio on October 22, 1932 to William & Genevieve Smithberger Wesel. He is survived by his wife Sally of 16 years and one brother, Joseph (Luada) Wesel, and two sisters, Catherine (Robert) Dickson, and Mary Agnes (Joseph) Augenstein, all of Marietta. He graduated from St. Mary's Catholic High School in 1950. After graduating from high school he worked for his parent's business, Marietta Ignition, and then went on to serve as an aircraft mechanic in the United States Air Force from 1953-1957. Bill married Mary Louise Voke of Stahlstown, PA on June 22, 1957, who preceded him in death on July 7, 1993. They had five children: Bill (Alberta), Ron (Charmel), and Diane (Scott) Hockenberry, all of Marietta; Karen (Bill) Barwinski of Columbus, OH; and Thomas (Kristin) of Portland, OR. On November 7, 1999, Bill married Sally Smith Sandstrom of Marietta, who survives him, along with her children: Eric (Anne) Sandstrom of Columbus, OH; and Sandi Shea and Kurt Sandstrom, both of Marietta. He had 15 grandchildren: Jeffrey, Andrew (fiance Katheryn Schafer), Aaron (Margie), and Eric Wesel; Stephanie (Ben) Chatham and Jenni (Ryan) Genest, of Charlotte, NC; Alissa, Emily, and Wesley Barwinski of Columbus, OH; Ryan and Aiden Wesel of Portland, OR; Ethan and Trent Sandstrom of Columbus, OH; Sarah Shea and Gary McCoy of Marietta. He had 6 great-grandchildren: Pam, Annie, Danyel, Cassidy, and Calliope Wesel of Marietta; and Avery Chatham of Charlotte, NC. He is also survived by many nieces, nephews, and cousins. One of Bill's greatest joys was celebrating his family. Bill was a prominent businessman in Marietta, serving as president of Marietta Ignition and on the board of directors for Marietta Automotive Warehouse and W.D.A. Inc.. Marietta Ignition was founded by his parents in 1920 as a service station. Bill worked hard with his family to grow the business into a multi-state venture as it is known today. Marietta Chamber of Commerce Co-Business Man of the Year was bestowed upon Bill in 1989. Bill was a very enthusiastic member of our local Rotary International Club for many years. He served as president, Safety Town committee member, served on the Rotary Foundation Scholarship Committee, the Rotary Exchange Program, and the new Rotary bus stop, and was a Paul Harris Fellow. His humor and antics with his Sergeant at Arms buddies were much appreciated by all club members. He truly lived his life using the Rotary 4-WAY TEST of the things we think, say, or do. Is it the truth? Is it FAIR to all concerned? Will it build GOODWILL and better FRIENDSHIPS? Will it be BENEFICIAL to all concerned? This was Bill. He often reminisced about how inspiring it was for him and for other local Rotarians to be involved with Jerry Traylor's journey spanning from San Francisco to the Atlantic shores in Atlantic City. Rotary clubs along Jerry's route cheered him on as he raised awareness for the handicapped and disabled. The excitement culminated in an invitation to join the Pulaski Day Parade in Manhattan. Bill was proud to be an original member of the Hippodrome/Colony Historical Theatre Association, serving as Vice President for ten years and a staunch supporter of the Peoples Bank Theatre renovation. He truly looked forward to the grand re-opening of this beautiful facility, and was thrilled to watch the progress of construction as recently as a few weeks ago. Bill was a sustaining member of the River City Symphony Orchestra. Bill considered "it a trip of a lifetime" when he and Sally accompanied in their RV three bicyclists and kayakers over land and on the rivers from Ipswich, Massachusetts to Marietta in 2013. They were celebrating the Westward Home 225th Anniversary Expedition paralleling the Ohio Company of Associates route in 1788. Their purpose was a fundraiser for the Boys and Girls Club of Marietta. This adventure gained in excess of $40,000 in contributions and pledges. Bill was a member of St. Mary's Catholic Church, serving on the parish council from 1982-1985. Bill enjoyed singing in the choir for many years. He was a member of the Knights of Columbus #478 and a past Grand Knight. He was also a member of the American Legion Post 64 and an avid supporter of Scouting. Bill enjoyed traveling, car racing and in recent years wintering in Florida with Sally. People will think fondly of Bill and remember him for his compassionate heart and witty sense of humor. Visitation will be held at the Marietta Chapel of Cawley & Peoples Funeral Home, Friday, November 27, 2015, from 10:00am-8:00pm with a Vigil Service at 3:00pm. Funeral Liturgy, with Mass, Saturday, November 28, 2015, at 10:00am at the Basilica of St. Mary of the Assumption. Gravesite services will be held immediately following the funeral mass at The New St. Mary Cemetery, with full military rites observed. The family wishes to thank Dr. Kelli Cawley, Strecker Cancer Center, and hospice for their kind and compassionate care. Memorial donations may be made to The Humane Society of the Mid-Ohio Valley, P.O. Box 5, The Hippodrome/Colony Historical Theatre Association, P.O. Box 1018, the Knights of Columbus #478, 312 Franklin St. or Saint Mary's School Foundation, 506 Fourth St., Marietta, OH 45750.

Charles William "Bill" Wesel, age 83, of Marietta, Ohio passed away on November 22, 2015 at his home. He was born in Marietta, Ohio on October 22, 1932 to William & Genevieve Smithberger Wesel. He is survived by his wife Sally of 16 years and... View Obituary & Service Information

The family of Charles William Wesel created this Life Tributes page to make it easy to share your memories.