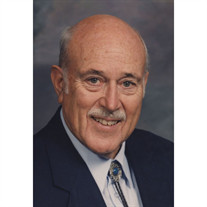 Creston Francis Whiting, Jr. 92, of Marietta, passed away peacefully in his grandfather's bed in his beloved family home into the arms of his Heavenly Father on Sunday, June 14, 2015. He was born in Okemah, Oklahoma on February 1, 1923 to Creston and Muriel Roser Whiting, Sr. Creston was a 1950 graduate of Marietta College. He was retired military, serving 37 years total. He served during World War II, first in the Army in the 4th Armored Division, then was recruited by the Air Force, where he retired as a Lt. Colonel. Throughout his military career he had been a scientific translator for NASA, had worked at the Library of Congress and at the Pentagon. Following his retirement from the military Mr. Whiting had taught Russian, German, and History at Marietta High School for 12 years. He was a member of the First United Methodist Church in Williamstown, American Union #1 F&AM, Marietta Shrine Club, Marietta Ad Club and ATO Fraternity at Marietta College. Creston is survived by five daughters, Sandi Ewaniszyk (Rick) of Victorville, CA, Jennifer Whiting of Williamstown, WV, Barbara Whiting of Cambridge, Hollis Whiting-Hall (Jack) of Carmel, CA and Cindy Merrill of Parkersburg, WV; ten grandchildren, Julia Crush, Laurie Thedoropoulos, Natalie Medina, Lexi Lovell, Justin Ewaniszyk, Johnny Spicer, Ariele Rodriguez, Creston Casey, Derek Merrill and Kelly Sizemore and ten great grandchildren. He was preceded in death by a daughter Isabelle Pearse. Visitation will be on Friday at the Marietta Chapel of Cawley & Peoples Funeral Home from 2 to 4 and 6 to 8 p.m. There will be a Masonic service at 7:30 p.m. on Friday. Funeral services will be on Saturday, June 20, 2015, at 11:00 a.m. at the funeral home, with Dr. Steve Gedon officiating. Burial will be in Putnam Cemetery, with full military honors. Donations may be made to the Humane Society, P.O. Box 5, Marietta, Ohio 45750.

Creston Francis Whiting, Jr. 92, of Marietta, passed away peacefully in his grandfather's bed in his beloved family home into the arms of his Heavenly Father on Sunday, June 14, 2015. He was born in Okemah, Oklahoma on February 1, 1923 to Creston... View Obituary & Service Information

The family of Creston Francis Whiting created this Life Tributes page to make it easy to share your memories.

Send flowers to the Whiting family.