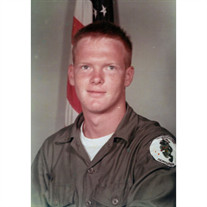 Daniel Lewis Rowley, 69, of Marietta, Ohio, died Tuesday, March 10, 2020, at his home. He was born on January 31, 1951 in Parkersburg, WV to Gilford J. and Ethel Lenore Valentine Rowley. Dan was a 1969 graduate of Federal Hocking High School. He then enlisted in the U. S. Navy for 10 years, where he was a Navy Seal. Dan retired in 2013 from Solvay, after 31 years of employment, as an Instrument Electrical Technician. He was a member of HarborSite Baptist Church, UDT Seal Association and a lifetime member of the NRA. Dan enjoyed hunting, fishing, building and flying RCA planes, and most of all, spending time with his grandchildren. He is survived he his mother of Tuppers Plains, Ohio; wife, Debra Sue Shanahan Rowley, whom he married on December 7, 1973; two children, Cassie Jackson and Carrie Rowley, both of Marietta; six grandchildren, Devin and Rachel Carpenter, Dakota, Levi, Sophia and Garrett Jackson; two brothers, Darrel "Steve" Rowley (Linda) of Barlow and Jerry Rowley (Sue) of Hamilton, Ohio; two sisters, Gloria Wheeler (Darrel) of Tuppers Plains and Beverly Wilfong (Dave) of Torch, Ohio; and many nieces and nephews. He was preceded in death by his father; and son in law, Chris Jackson. Funeral services will be held at 1:00 p.m. on Friday, March 13, 2020 at the Marietta Chapel of Cawley & Peoples Funeral Home, with Pastor Don Arbuckle officiating. Burial will follow in Evergreen North Cemetery in Parkersburg, WV, with full military honors. Visitation will be at the funeral home for two hours prior to the service. Cawley & Peoples is honored to serve Dan's family and offers online condolences and many other resources by visiting their website, CawleyandPeoples.com.

The family of Daniel Lewis Rowley created this Life Tributes page to make it easy to share your memories.

Send flowers to the Rowley family.