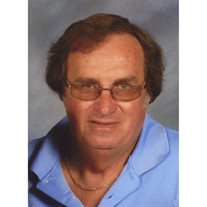 Darrel Lee Goodwill, 65, Lowell, died Tuesday afternoon, September 16, 2014, at Marietta Memorial Hospital. Born April 14, 1949 in Marietta, he was a son of Betty Lou Swain Goodwill and the late Dickson Goodwill. Darrel was a 1967 graduate of Caldwell High School. He had been employed with Ohio Power, retiring in 2010. He was a member of the Sons of the American Legion, Post 750, Knights of Pythias, Lodge 395 and the L-A Volunteer Fire Department since 1974. Darrel enjoyed NASCAR, morning coffee with his friends, and most of all, spending time with his grandchildren. Surviving in addition to his mother and her friend, Ken Scheich, of Caldwell, are his wife, Deborah Fawn Hinton Goodwill, whom he married April 27, 1969, and two children, Lori Fawn Osborn (Brian Keith) of London, OH, and Darrel Keith Goodwill (Stacy Rohde) of Lowell. Seven grandchildren, Savannah, Sierra and Joseph Osborn, Scott, Tim and Ethan Shumar, and Hailee Rohde. Also surviving are a brother Larry Goodwill (Jackie) of Marietta and a sister Denise Christmas, of Sarahsville, many nieces and nephews and a very close friend, his Uncle Frank Swain, of Dexter City. Funeral services will be at 1:00 pm Saturday, September 20, 2014, at the Lowell Chapel of Cawley & Peoples Funeral Home, with Pastor Charles Hall officiating. Burial will be in Lund Cemetery, in Macksburg. Darrel's family will greet friends on Friday, from 2-4 and 6-8 pm and for one hour prior to the services on Saturday. The Sons of the Legion will conduct a brief service at 7:00 pm Friday. Donations may be directed to the L-A Fire and Rescue, P.O. Box 406, Lowell, OH 45750.

The family of Darrel Lee Goodwill created this Life Tributes page to make it easy to share your memories.

Send flowers to the Goodwill family.