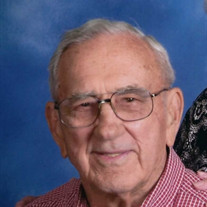 Delbert Charles “Deb” Lang, 95, of Marietta passed away Tuesday, August 10, 2021. He was born April 18, 1926 to the late Joseph and Mary Arnold Lang. Deb, as he was better known, entered the Army in Nov. 1944, serving in the European Theater during WWII and he was discharged in 1946. Upon his return from the service, he started working at Schott Truck and Equipment. Delbert and Norma Stollar were united in marriage on May 18, 1948 at St. John the Baptist Catholic Church in Churchtown, Ohio. Delbert and his wife Norma started their business in Watertown, Ohio on April 6, 1952 as Lang Farm Equipment. They moved the business and also their residence to Marietta in June of 1954. Later the business moved to Rt 7 south changing the name to Lang Outdoor Power and Equipment. In 1994 the business was sold to their son, V. Douglas Lang. Deb continued to work in the business as long as his health permitted. Delbert was an active member of the Basilica of St. Mary of the Assumption, ushering the early mass for 30 years. He was a member and Past Grand Knight of the Knights of Columbus Council 478. He also was a Past Faithful Navigator of the 4th Degree of the Bishop Hartley Assembly. He had been on the advisory board of the Ohio Farm and Power Equipment Association. He was a member of the VFW Post 5108. Deb enjoyed people and traveling, golf, dancing and bowling. Delbert is survived by his wife of 73 years, one daughter, Deborah Westfall (Dave) of Newark, AR; three sons, David Lang (Sylvia), Douglas Lang (Pamela), and Jeffrey Lang all of Marietta; nine grandchildren, David (April), Dana (Caryn), Doug (Sarah), Derek (Ashton), Danielle Robinson (Zach), Sandra Smutz (Adam), Marian Austin (Joel), Stacie Shouse (Jeff), and Carrie Stutler (Jeremy); eleven great grandchildren; one brother, Jack Lang (Janet) and one sister, Evelyn Neill. He was preceded in death by nine brothers, Harold, James, Vincent, Bernard, Walter, Robert, Gerald, Joseph and Glenn; three sisters, Grace Strahler, Shirley Stollar Oliver and Alice Schilling and one grandson, Kevin Westfall. Funeral Liturgy with Mass will be 10:00 Saturday, August 14, 2021 at The Basilica of St. Mary of the Assumption, with The Rev. Msgr. John Michael Campbell as celebrant. Entombment will follow in the East Lawn Mausoleum, with Military Honors. The family will greet friends at the Marietta Chapel of Cawley & Peoples Funeral Home on Friday from 2 to 4 and 6 to 8 p.m. with a Vigil service at 3:00 p.m. Memorial donations may be made to St. Mary’s School, 320 Marion Street, Marietta, OH 45750. Cawley & Peoples Funeral Home is honored to serve Delbert’s family and offers online condolences and many resources by visiting www.cawleyandpeoples.com or on their Facebook page.

The family of Delbert Charles Lang created this Life Tributes page to make it easy to share your memories.