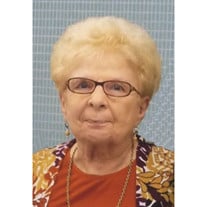 Dena Darlene Watkins, 78, of Marietta, died Tuesday, December 3, 2013, at Marietta Memorial Hospital. She was born August 20, 1935 in Pine Grove, WV. Dena graduated from Pine Grove High School, where she won the "I Dare You" award and was homecoming queen. She spent most of her life as a loving and devoted wife, mother, and grandmother. She had worked for about ten years for Farmers Mutual Insurance Company. Dena was a member of the Westminster Presbyterian Church in Vienna, and was a former member of the Veto Presbyterian Church. She is survived by her daughter, Kathy Dunfee (Bill) of Belpre, grandsons, Ryan Dunfee of Marietta, Daniel Dunfee (Hope) of Little Hocking, and Andrew Dunfee (fiancée, Kelsey Abbott) of Columbus, great granddaughter, Laci, and great aunt, Garnette Thorne. Dena was preceded in death in 2010 by her husband, Jack Watkins, who she married in 1956. Jack and Dena were a very close, loving couple who greatly enjoyed their life together and their family. She was also preceded in death by an infant daughter and her parents, Frances and Eugene Kincaid. Dena loved her family so much and will be greatly missed by them as the caring, supporting loved one that she was. Funeral services will be held at 10:00 a.m. on Friday, December 6, 2013, at the Barlow Chapel of Cawley & Peoples Funeral Home, with her son in law, Pastor Bill Dunfee, officiating. Friends may call on Thursday from 2 to 4 and 6 to 8 p.m. Burial will be in Paden Memorial Gardens, Paden City. Donations may be made to the Westminster Presbyterian Church, 708 54th. St., Vienna, WV 26105 or the Warren Township Fire Department, 17305 St. Rt. 550, Marietta, OH 45750.

Dena Darlene Watkins, 78, of Marietta, died Tuesday, December 3, 2013, at Marietta Memorial Hospital. She was born August 20, 1935 in Pine Grove, WV. Dena graduated from Pine Grove High School, where she won the "I Dare You" award and was homecoming... View Obituary & Service Information

The family of Dena Darlene Watkins created this Life Tributes page to make it easy to share your memories.

Send flowers to the Watkins family.