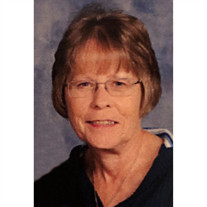 Diana Lee Lang, 70, of Vincent, Ohio, went home to be with the Lord, Tuesday, January 15, 2019, in Marietta, Ohio. She was born on February 28, 1948 in Marietta, Ohio to William Lester and Eleanor Miller Bohl. Diana was a 1966 graduate of Warren High School. She was a member of St. Ambrose Catholic Church and the Barlow VFD Auxiliary. Diana spent most of her married life as a homemaker, dedicating her time to her husband and children. She was an avid reader and enjoyed spending time with her family, including going to as many activities in which her grandchildren participated in as possible. She was known by many in the community as "friend" and helped others as much as possible. She is survived by four children, Deanna Marie Ritchie of Barlow, Michelle Dawn Higgins of Barlow, Martin James Lang (Jessie Wagner) of Watertown, Ohio, and Matthew Jordan Lang (Angela) of Sunbury, Ohio; nine grandchildren, Aaron, Kaylee and Jenna Higgins, Adrienne, Lena, Olivia, Jaxton, Evan and Tyler Lang; siblings, Judy Lang of Marietta, Lewis Bohl (Maxine) of Vincent, Sharon Kegley (Will) of Vincent, Bill Bohl (Joan) of Vincent, Pam Augenstein of Marietta, Joan Williams of Barlow; and many nieces and nephews. She was preceded in death by her parents; husband, Martin Francis Lang, whom she married on May 18, 1968; and siblings, Shirley Schilling, Bob and Gary Bohl, Mary Schilling and Brenda Heiss. Funeral service will be held at 10:00 a.m. on Friday, January 18, 2019, with Pastor Rick Hastings officiating. Burial will follow in Barlow Central Cemetery. Visitation will be on Thursday, from 2 to 8 p.m. at the funeral Home, with a Rosary being recited at 7:00 p.m. Donations may be made to Strecker Cancer Center

Diana Lee Lang, 70, of Vincent, Ohio, went home to be with the Lord, Tuesday, January 15, 2019, in Marietta, Ohio. She was born on February 28, 1948 in Marietta, Ohio to William Lester and Eleanor Miller Bohl. Diana was a 1966 graduate of Warren... View Obituary & Service Information

The family of Diana Lee Lang created this Life Tributes page to make it easy to share your memories.