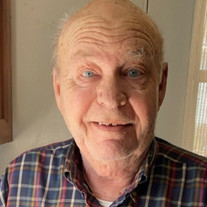 Donald Aldege Joseph Duquette, Sr., of Marietta, Ohio, died October 22, 2021 at Marietta Memorial Hospital. He was born on March 20, 1935 in West Warwick, Rhode Island to Omer Emile and Orise Blanche Dion Duquette. He has resided in Marietta since 2017, prior to that he was from Damascus, MD, for 47 years. Don graduated from West Warwick Senior High School 1952 and then graduated from the University of Rhode Island in 1956 with a Bachelor of Science in Mechanical Engineering. Following serving his country in the Army he moved to California where he met and married Sandra Sidinger in 1967. They moved to Boston where he was employed by the ITech corporation, where he worked on the camera that photographed the back side of the moon. In 1971, they moved to Damascus, MD where he started working for Fairchild for a short time and then went to Bechtel Corporation and retired from there in the mid 1990’s as a Senior Engineer in the Civil Engineering Division. He is survived by his two sons, Douglas Duquette of Columbus, Ohio and Donald Duquette, Jr of Marietta and their mother, Sandra Sidinger Duquette, of Marietta; grandson, Thomas Duquette of Marietta; longtime friend, Joann Keister of Brookville, MD; and many cousins including, Sharon Murphy (Ramiro) Garcia of Ellicott City, MD, Patricia Murphy Philip of White Bear Lake, MN, and Brian (Barbara) Murphy of Hope Valley, RI. He was preceded in death by his parents; daughter in law, Nancy Scharff Duquette; and his many aunts and uncles. Visitation will be on Tuesday, October 26, 2021 from 5 to 7 p.m. at the Marietta Chapel of Cawley & Peoples Funeral Home. Following cremation, he will be buried with graveside services in Saints Peter and Paul Cemetery, Coventry, Rhode Island. Cawley & Peoples is honored to serve Don’s family and offers online condolences as well as many other resources by visiting their website, CawleyandPeoples.com or by going to their Facebook page.

The family of Donald Aldege Joseph Duquette created this Life Tributes page to make it easy to share your memories.

Send flowers to the Duquette family.