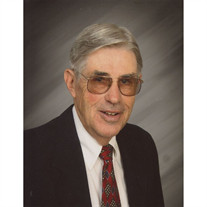 Donald G. Falkner, 87, of Marietta, died Sunday, January 31, 2016, at Marietta Memorial Hospital. He was born February 10, 1928, in North Ridgeville, Ohio, to Charles R. and Eleanor Terrell Falkner. Don was a 1946 graduate of Ridgeville High School and a 1950 graduate of Baldwin-Wallace College. He had been involved in the banking industry for 37 years and retired in 1988, as president, from the Citizens Bank Company in Beverly. He was a former board of directors' member of the Community Bankers Association of Ohio, had been involved with investment clubs in the Mid-Ohio Valley, and was a founding director and past president of the WV/OH Chapter of the National Association of Investment Clubs. Don is survived by his wife, Barbara Kelsey Falkner, they were married on September 7, 1968, by a daughter, Beth Falkner-Brown (James), of Willoughby and a daughter in law, Dr. Deborah Baum, of Shaker Heights. He was preceded in death by his parents and a son, Russell Falkner. Abiding with his wishes, he will be cremated and his ashes will be buried at a later date in Westwood Cemetery, Oberlin, Ohio.

The family of Donald Gene Falkner created this Life Tributes page to make it easy to share your memories.

Send flowers to the Falkner family.