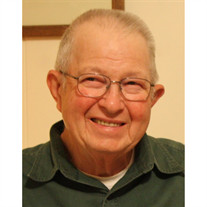 Donald Gordon Greenlees On April 5, 2018, at 2:17 p.m., Donald Gordon Greenlees finished the race and was welcomed by the Heavenly Host including family and friends that had preceded him in death. He was born on February 23, 1935 at Marietta Memorial Hospital, the first of three sons, of Hugh Gordon and Dorothy Stephens Greenlees. He graduated from Vincent High School in 1952. He attended The Ohio State University, majoring in vocational agriculture. In the winter of 1955 on the corner of Broad and High in Columbus, Ohio, he met the love of his life, Elizabeth Rennie, a Scottish lassie who immigrated to America in 1952. On October 27, 1956, they were married, and started a 62 year journey. He retired from Globe Metallurgical in 1986, after 31 years as a lab chemist. In 1967 he accepted Jesus Christ as his Lord and Savior. In his earlier days of serving God, he was a lay speaker in the Methodist and Presbyterian churches. He was active in the Full Gospel Business Men's Fellowship and will forever be remembered as the president of the Marietta Chapter. Don was a man after the heart of God, he walked in love and lived a life marked by grace and mercy, freely giving to all, those things that God freely gave to him. He is survived by his wife, Elizabeth "Elspeth" Rennie Greenlees; two children, Dorothy Holbert (Willie) of Little Hocking, Ohio and John Greenlees (Pam) of Belpre, Ohio; six grandchildren, David Pettengill (Lindsey), Daniel Pettengill (Kate), Kyle Holbert, Lacey Mitchem (Jered), Christina Bowen (Tony), and Kelsi Ullom (Brandon); nine great grandchildren; two brothers, Dale Greenlees (Shirley) of Fleming and Kenneth Greenlees (Linda) of Fleming; son in law, Ron Pettengill of Vincent, Ohio; and many nieces and nephews. He was preceded in death by his parents; and daughter, Margo Pettengill. Funeral services will be held at 1:00 p.m. on Monday, April 9, 2018 at the Barlow Chapel of Cawley & Peoples Funeral Home, with his son, John Greenlees, officiating. Burial will follow in Barlow Central Cemetery. Visitation will be on Sunday, from 2 to 4 and 6 to 8 p.m. and for one hour prior to the services on Monday.

The family of Donald Gordon Greenlees created this Life Tributes page to make it easy to share your memories.

Send flowers to the Greenlees family.