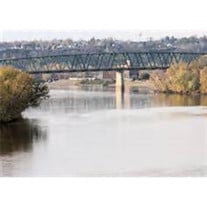 Dwayne David Stone, also known by his friends and colleagues as Stoney, died at age 79 on December 18, 2013, due to brain cancer. He was born March 23, 1934 in Knoxville, Iowa to Dwight H. Stone, D.O. and Hazel Gibson Stone. After graduating from Knoxville High School in 1953, he received a Bachelor Degree in Geology from the University of Iowa, Iowa City and the Ph.D. in Geology at the University of Utah, Salt Lake City. In 1964 he was hired as a Geology teacher at Marietta College, Marietta, Ohio. He then rose through the ranks to professor, and taught Geology courses (Physical Geology, Historical Geology, Invertebrate Paleontology, Micropaleontology, Dinosaurs, Sedimentology) for 29 years. While in Utah in the late 1960s, he unearthed his first dinosaur bones that have captivated generations of students and alumni. In the early 1970s, he helped Marietta College develop the Paleontology program and led them on expeditions where he uncovered a new species of amphibians that was named after him, the Acheloma stonei. The Acheloma stonei, formerly known as the Trematops stonei, was excavated from the Creston shale just south of Marietta, on St. Rt. 7. He retired in 1993 and resided in the Devola area of Marietta, Ohio. Following retirement, he taught on occasion, college dinosaur courses and Institute for Learning In Retirement at Marietta courses pertaining to Marietta geology and wild flower plants. In 2007 he was inducted to the Marietta College Department of Petroleum Engineering and Geology Hall of Fame, in honor of his outstanding accomplishments and contributions to the college, its students and alumni. Much of his estate will be given to Marietta College to honor the fantastically great time he had at the institution. Stoney served for eighteen years in the Army Reserves during the Viet Nam era. With his many antique cars, he attended several hundred antique car shows and was awarded hundreds of trophies throughout the years. He was preceded in death by his parents and brother, Dwight H. Stone, Jr. M.D. He is survived by Shane Bishop, whom he considered his son, and two cocker spaniels, Heidi IV and Heidi V, plus countless friends. No funeral services will be held, per Dr. Stone's request. In lieu of flowers and gifts, please make all donations in memory of Dr. Dwayne D. Stone to Marietta College, c/o Linda Stroh, 215 Fifth St., Marietta, OH 45750, for the Stone Family Fund. Stoney's cremation arrangements are being handled by the Marietta Chapel of Cawley & Peoples Funeral Home.

Dwayne David Stone, also known by his friends and colleagues as Stoney, died at age 79 on December 18, 2013, due to brain cancer. He was born March 23, 1934 in Knoxville, Iowa to Dwight H. Stone, D.O. and Hazel Gibson Stone. After graduating... View Obituary & Service Information

The family of Dwayne David Stone created this Life Tributes page to make it easy to share your memories.

Dwayne David Stone, also known by his friends and colleagues...

Send flowers to the Stone family.