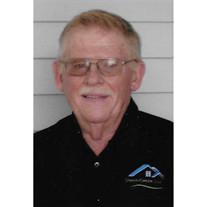 Dwight Harold Biehl, 81, of Beverly, Ohio, died Saturday, February 17, 2018 in Marietta, Ohio. He was born on September 27, 1936 in Whipple, Ohio, to Raymond E. and Florence E. Semon Biehl. Dwight was a 1954 graduate of Marietta High School. He served our country in the United States Marine Corps from 1956 to 1960. Dwight had worked at Union Carbide and retired from DuPont in 1994. He enjoyed farming with his brother, Dwain, involving cattle and hay. He was a member of Masonic Harmar Lodge, #390, Lowell Christian Church and Lowell United Methodist Church. Dwight had been involved with Biehl Insurance Agency with his father and brother. He was an avid fan of Fort Frye High School and WVU athletics and he and Charlotte enjoyed traveling with their friends in the Stardusters Square Dance Club. Dwight thoroughly enjoyed traveling in his retirement with his wife. He was a member of the Marine Corps League, Sgt. Bob O'Malley Detachment #1436. He also was a member of Little Muskingum Grange and Ohio State Grange. He is survived by his wife, Charlotte Irene Dye Biehl, whom he married on January 16, 1997; one sister, Selma Anderson of Williamstown, WV; three nephews, Chuck Anderson (Sharon), Dave Anderson (Kathi), Donnie Anderson (Michelle); niece, Michelle Crum (Kenny); step-daughter, Tricia Becker (Fred) of Stanleyville; step-son, Douglas Dye (Deana) of Beverly; three step-grandchildren, Kayla and Brandon Dye, and Megan Becker; and special friends, Melvin and Cindy Turner and their daughters, Shanell Jeffrey (Adam) and Meghan Freed (Mark). He was preceded in death by his parents; twin brother, Dwain; brother in law, Charles Anderson; and step-granddaughter, Faith Elizabeth Becker. Funeral services will be held at 11:00 a.m. on Wednesday, February 21, 2018, at the Marietta Chapel of Cawley & Peoples Funeral home, with the Rev. Darla Schneeg, Rob Tuttle and Zach Waite officiating. Burial will follow in Oak Grove Cemetery, with full military honors observed. Visitation will be on Tuesday, from 2 to 4 and 6 to 8 p.m. at the funeral home. Donations may be made to the Christian Children's Home, P.O. Box 765, Wooster, Ohio 44691 or to the Beverly/Waterford Squad, P.O. Box 223, Beverly, Ohio 45715.

The family of Dwight Harold Biehl created this Life Tributes page to make it easy to share your memories.

Send flowers to the Biehl family.