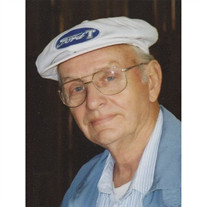 Charles Edward "Ed" Lawton, 90, passed away peacefully on December 21, 2013 at his home on the family farm in Barlow, OH. He was born on May 18, 1923 in Barlow, the son of the late Charles Edward and Janet Finch Lawton. Ed graduated from Vincent High School in 1941 and married Oleta Walls on November 7, 1948. They celebrated their 65th wedding anniversary this fall. Ed was the fifth generation of Lawtons to live on the family farm, purchased from the Ohio Company in 1798. In the fall of 1941 he attended Ohio University for Aviation Mechanics and worked for Goodyear in Akron, building F4U Corsair and B-24 aircraft. He entered the Army Air Corps in 1943 as a mechanic and was training to be a pilot as the war ended. Ed returned to the family farm, married Oleta and worked at Union Carbide Plastics and was a leader in the community of Barlow, serving on the fairboard, president of the PTA, Scout Master and trustee in the Barlow United Methodist Church. Ed was honored to be the Grand Marshall of the Barlow Fair parade and proudly led the Bicentennial Parade in his 1923 Model T Ford, which he had restored. Both Ed and his "T" turned 90 this year. Ed was a caring and generous man, well loved by his family and community. He was a talented mechanic and known to fix anything for many of his friends and neighbors. He will always be remembered for his quick wit and his hugs to his family and dog, Jessie. Along with his loving wife, Oleta, Ed is survived by his six children, Linda Lawton (Ted Goertzel) of Fleming, Leanne Lawton (Jim Caskey) of Cincinnati, Cheryl Haupt (Paul) of Menominee, MI, Bruce Lawton (Cheryl) of Rohnert Park, CA, Bonnie Bachman (Ed) of Cincinnati, and Cindy Mallahan (Allen) of Vincent. "Papa" was also the proud grandfather of ten grandchildren, Zach, Ian and Eric Thomas, Isaac Ward, Allie and Eli Mallahan, Drew and Travis Haupt, and Chelsea and Hannah Bachman. He also had four step-grandchildren, two great grandchildren and eight step-great grandchildren. Also surviving are his sisters, Isabel Brown and Shirley Ormiston (Bill). Ed was preceded in death by his brother, Irvin Lawton (Mary Ann) and a sister, Mary Lou West. The family will greet friends at the Barlow Chapel of Cawley & Peoples Funeral Home from 5-8 pm Thursday, December 26, and from 2-4 and 6-8 pm on Friday. Funeral services will be held on Saturday, December 28, 2013 at 11:00 am at the Veto Presbyterian Church, with the Rev. Jeff Hancock officiating. Burial will follow in the Lawton Family Cemetery, situated on the family farm. Full military honors will be observed. In lieu of flowers, the family suggests that memorial contributions should be directed to either the Barlow Volunteer Fire Department, P.O. Box 121, or the Barlow United Methodist Church, P.O. Box 3, both in Barlow, OH 45712.

Charles Edward "Ed" Lawton, 90, passed away peacefully on December 21, 2013 at his home on the family farm in Barlow, OH. He was born on May 18, 1923 in Barlow, the son of the late Charles Edward and Janet Finch Lawton. Ed graduated from Vincent... View Obituary & Service Information

The family of Ed Lawton created this Life Tributes page to make it easy to share your memories.

Send flowers to the Lawton family.