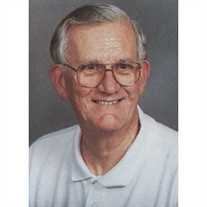 W. Edward Dimmerling, 81, of Marietta, died Sunday, January 13, 2019. Born January 13, 1938 in Caldwell, OH, he was a son of the late Walter George and Edna Mary Noll Dimmerling. He attended St. Mary's Catholic Schools and received his Bachelor of Science in Electrical Engineering from Ohio University in 1965. Ed had retired from the Union Pacific Railroad and later from Belmont Technical College. Ed was a member of the Basilica of St. Mary of the Assumption, Knights of Columbus #478, Loyal Order of Moose #1823 and the National Rifle Association. He is survived by two sisters, Sister Marlene Dimmerling, O. P., of Columbus, and Karen Burfield, of Delaware, OH; five nieces, Erin, Kelly, Lisa, Leslie and Jill; and many great-nieces and great-nephews. He was preceded in death by his parents and a sister, Janet Hays. Funeral Liturgy, with Mass will be celebrated 10:00 am Wednesday, January 16, 2019 at the Basilica of St. Mary of the Assumption with The Rev. Msgr. John Michael Campbell officiating. Burial will be at Mt. Olivet Cemetery in Caldwell, OH. Ed's family will greet friends at the Marietta Chapel of Cawley & Peoples Funeral Home on Tuesday, from 2-5 pm, where a Vigil Service will be held at 3:00 pm. Cawley & Peoples Funeral Home is honored to assist the Dimmerling family, offering on-line condolences and many other resources by visiting www.CawleyandPeoples.com .

The family of Edward Dimmerling created this Life Tributes page to make it easy to share your memories.

Send flowers to the Dimmerling family.