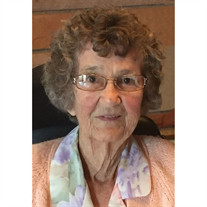 Elizabeth Catherine O'Linn Pottmeyer "Betty", 86, of Churchtown died Monday, September 18, 2017 at Camden Clark Medical Center in Parkersburg surrounded by her family. Born February 15, 1931, she was the daughter of Walter Thomas O'Linn and Ada Bules O'Linn of Churchtown. Betty attended both Christy and Grandview one room schoolhouses, and graduated from St Mary's Catholic School. She married Robert Henry Pottmeyer on September 26, 1950. They enjoyed raising 11 children and living next to the church and school. She was a member of St. John the Baptist Catholic Church. Betty was a member of St. John the Baptist Catholic Women's Club, Bridge Club, Churchtown Seniors, Busy Bunch Quilt Club, and Historical Society. Volunteering through 4-H was one of her most rewarding activities. She was a 4-H Club Advisor for many years and was honored to be on the Camp Hervida Board. Betty was proud of her Irish family heritage. Her great grandparents were some of the first settlers in the Churchtown area from County Cork Ireland. She is survived by her children, Ken Pottmeyer (Cindy), Chris Pottmeyer, Ted Pottmeyer (Karen), Dave Pottmeyer (Tammy), Eric Pottmeyer (Marilyn), Trina Miller (Ted), Erin Pottmeyer (Sherri), Jay Pottmeyer (Marilyn), Dennis Pottmeyer (Carla), Laurene Huffman (Doug), Kim Simmons (David), and family friend Curt Loken (Sharon), grandchildren, Lacey Lauchard, Nick, Derrick, and Alex Pottmeyer, Dustin and Heath Pottmeyer, Layne Arthur and Blake Pottmeyer, Tiffany Vesperman and Ashleigh Strahler, Kayla Ciotti, Clay and Brice Miller, Taylor, Kaitlin, and Travis Pottmeyer, Johanna McNabb, Cole and Tanner Pottmeyer, Brooke and Hunter Pottmeyer, Belle, Abby, Sydney Anne, Jude and Henry Huffman, Alexis and Gia Rose Simmons, 20 great grandchildren; sister in law, Norma O'Linn; and many nieces and nephews. She was preceded in death by her parents; husband on May 25, 2015; infant son Francis Edward Pottmeyer; brothers, William, Walter, Anthony, Joseph, and Donald O'Linn; and sister, Clare Huck. She was the last surviving member of her family. The absolute joy of her life were her grandchildren. They will be left with many memories of campouts, tea parties, dressing up, and great conversations. She also has enjoyed her great grandchildren. Every one being completely special. Betty dedicated her life to her family and faith, living every day to do God's will. There was never a time when her wants came before the needs of her family and friends. Her life is a true testament of Faith, Hope, and Love. Funeral Liturgy with mass will be held at 10:00 a.m. on Friday, September 22, 2017 at St. John's Catholic Church in Churchtown, with The Rev. Timothy Davison celebrating. Burial will follow in the church cemetery. Visitation will be on Thursday, from 2 to 8 p.m. at the Marietta Chapel of Cawley & Peoples Funeral Home, with a Rosary being held at 2:00 p.m. Donations may be made to St. John's School Foundation, 17784 St. Rt. 676, Marietta, Ohio 45750.

The family of Elizabeth Catherine Pottmeyer created this Life Tributes page to make it easy to share your memories.