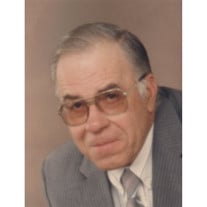 Eugene "Rudy" Biehl, 85, of Whipple, died Saturday evening, January 11, 2013, at Harmar Place, in Marietta. Born July 12, 1928, he was the son of the late Melvin F. and Elsie E. Schantz Biehl. Rudy had actively farmed and had a dairy farm from 1928 to 1980. During this time he served on the Farm Service Agency and on the Washington County Soil and Water Conservation District as a supervisor. He was one of the instrumental people in the construction of the Whipple Grange Hall, of which he was a member. He had served two terms as a Fearing Township Trustee, and was proud of his efforts in having the Fearing Township Equipment Garage constructed, which also housed a new meeting room for the trustees. He also helped with the building of the Fearing Township Volunteer Fire Department. He had one of the first dairy herds in Washington County to be enrolled in the Dairy Herd Improvement Program (DHI). Rudy also was one of the first farmers in Washington County to implement "no till" farming. In 1971 he was awarded the Goodyear Conservation Award. He had been a 4-H advisor for more than thirty years. From 1980 to present, Rudy had become heavily involved in the oil and gas industry. He was extremely proud of his work as a production supervisor and later as a Landman for Stonebridge Operating, of Marietta. Surviving are four sons, David Biehl (Debbie) of Whipple, Kevin Biehl (Michele), Jacob Biehl and Samuel Biehl (Julia Jaffe), all of Marietta; two daughters, Kathryn Biehl and Barbara Leimkuehler (Henry), all of Marietta; five grandchildren, Joshua Biehl (Jessica), Jennifer Seaman (Doug), Channing Templeton (Heath), Ashton Biehl and Aiden Biehl; six great-grandchildren, Alayna, Alyssa, Jozie and Jackson Biehl, Jordan and Adalyn Seaman. Also surviving is Amy Biehl, wife of Rudy's grandson Adam Biehl who preceded him in death last March. Also preceding him in death was his wife, Patricia A. Irwin Biehl, and a son Vance Biehl. Funeral services will be held 10:30am Wednesday, January 15, 2014, at the Marietta Chapel of Cawley & Peoples Funeral Home, with The Rev. Thomas Hendershot officiating. Burial will be in Berg Church Cemetery. The family will greet friends on Tuesday from 2-8pm. Rudy's family would like to express special thanks to the staff at Harmar Place for the loving care extended. It is suggested that memorial donations may be directed to Marietta Home Health & Hospice, 450 Pike Street, Suite I-1, Marietta, OH 45750.

Eugene "Rudy" Biehl, 85, of Whipple, died Saturday evening, January 11, 2013, at Harmar Place, in Marietta. Born July 12, 1928, he was the son of the late Melvin F. and Elsie E. Schantz Biehl. Rudy had actively farmed and had a dairy farm from... View Obituary & Service Information

The family of Eugene Biehl created this Life Tributes page to make it easy to share your memories.

Send flowers to the Biehl family.