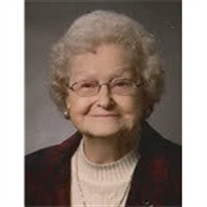 Frances Wickens Coffman, 89, Lowell, died Sunday morning, November 17, 2013, at Marietta Memorial Hospital. Born August 23, 1924, on Cats Creek, Lowell, she was a daughter of the late Wallace and Ethel Merritt Wickens. She was a graduate of Lowell High School. Frances had been employed at Remington Rand during WWII, and later as a secretary where she welcomed and is fondly remembered by hundreds of students at Lowell Elementary School for 23 years, retiring in 1986. She was a member of the Fifth Street Church of Christ in Beverly, where she played piano for many years and Chapter #272, Order of Eastern Star, in Lowell. Frances is survived by one son, Vaughn Coffman (Laurie), of Norfolk, VA, and two daughters, Deborah Furr (Jim), of Lowell, and Kathy Price (Geoff), of Akron, OH. Also surviving are eight grandchildren; Rhett Coffman (Rose) and Elizabeth Coffman and Eduardo Aviancini, Mark Furr (Crystal), and Matthew Furr (Erica), Courtney Kendle, Kristen Oberhaus (Mike), G. R. Price and Geoffrey Price (Joanna); twelve great-grandchildren; several nieces and nephews, and a sister-in-law, Gerry Wickens, of Dayton, OH. Frances was preceded in death by her husband, Clarence L. "Ike" Coffman April 4, 2003. They had been married on September 26, 1942. Also preceding her in death was her brother, Stacil Wickens, and his first wife, Lorene "Rene" Wickens. Funeral services are scheduled for 11:00am Thursday, November 21, 2013, at the Fifth Street Church of Christ, in Beverly. Officiating will be Ministers Zack Waite and Ron Laughery. Burial will be at Greenlawn Cemetery, in Lowell. The family will greet friends at the Lowell Chapel of Cawley & Peoples Funeral Home on Wednesday, from 2-4 and 6-8pm, and at the church for one hour prior to service time. The family suggests that memorials may be directed to either the L-A Fire and Rescue, P. O. Box 406, Lowell, OH 45744, or her church, at 229 Fifth Street, Beverly, OH 45715.

Frances Wickens Coffman, 89, Lowell, died Sunday morning, November 17, 2013, at Marietta Memorial Hospital. Born August 23, 1924, on Cats Creek, Lowell, she was a daughter of the late Wallace and Ethel Merritt Wickens. She was a graduate of... View Obituary & Service Information

The family of Frances Wickens Coffman created this Life Tributes page to make it easy to share your memories.

Send flowers to the Coffman family.