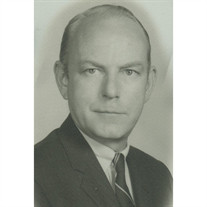 Frederic Searle Wood, 90, of Marietta, Ohio, died July 4th, 2018, at his home surrounded by his loving family. He was born on September 16, 1927 in Bay Shore, Long Island, NY, to Frederic Jarvis and Jessica Searle Wood. After attending Babylon High School, Fred joined the Navy in August of 1945 and was stationed in the Pacific until June of 1946. He is no doubt one of the last witnesses of the atomic bomb test at Bikini Atoll in 1946. He then went to St. Lawrence University, graduating in 1951. Upon graduation, he was drafted by the Army. After attending OCS at Fort Benning, he was stationed at Fort Rucker, AL through 1953. Fred worked for Shell Oil Company for 34 years, retiring in 1988. During the course of his career, he and his wife Patricia enjoyed three years in Saudi Arabia, from where they traveled the world. Fred was a Son of the American Revolution, a member of The Basilica of St. Mary of the Assumption, The Marietta Reading Club, Marietta Country Club, Tennis Center, Washington County Public Library and Historical Society, the Lion's Club, American Union Masonic Lodge #1, F&AM, Friends of the Museum, and a member of the prestigious luncheon club known as The Apostles. He enjoyed serving as both docent and Board President of The Castle Museum. He received the President's Volunteer Service Award to recognize 25 years of volunteer service at The Recycling Center of Marietta. He loved reading both history and fiction, music, ballet and most of all family. He and his wife dearly loved to travel, having been to every continent. He is survived by his wife, Patricia Vanderveldt Wood, whom he married on April 5, 1952; three children, Jessica, Gwendolyn (Michael) and Patricia; grandchildren, Charles Frederic, Colin Jarvis and Emily Grace, and many extended family and friends. He was preceded in death by his son, Frederic Jarvis in 1985. His family is most grateful to Marietta Home Health and Hospice for their excellent care and kindness to Fred and the whole family. Funeral Liturgy with Mass will be held at 11:00 a.m. on Saturday, July 14, 2018 at The Basilica of St. Mary of the Assumption with The Rev. Msgr. John Michael Campbell as celebrant. Private burial of ashes will take place at a later time in Mound Cemetery. Family will greet friends immediately following the Mass in the social hall of the church for a Celebration of Life. In lieu of flowers, donations can be made to Marietta Home Health and Hospice, 450 Pike Street, Suite I-1, Marietta, OH 45750; Marietta Community Foundation at [email protected]; or to the Marietta Recycling Center, 701 Colgate Drive, Marietta 45750.

The family of Frederic S Wood created this Life Tributes page to make it easy to share your memories.

Send flowers to the Wood family.