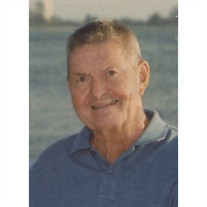 Frederick E. Combs, Jr., 86, of Marietta, passed away at home on Tuesday, February 9, 2016, following a long illness. He was born in Spencer, WV on April 12, 1929 to Fred E. and Beulah Smith Combs. Fred graduated from Spencer High School and Potomac State College after which he attended school in Louisville, KY in medical technology. He was then employed as a medical technician in Harlan, KY and Charleston, WV. He enlisted in the U.S. Marine Corps during the Korean War and was stationed on Vieques Island, in Puerto Rico, and at the Nevada Proving Grounds, where he participated in testing the atomic bomb. Following his discharge from service, he attended West Virginia University where he graduated as a pharmacist. Fred was a member of Kappa Psi honorary fraternity and Mu-Pi, social fraternity. He was then employed by McKinley Pharmacy in Parkersburg, WV, Hughes Drug in Spencer, WV, National Drug in Marietta, OH and Revco Drug, Marietta, where he retired after many years. In 1957, he married Jane Woodyard, his wife of 58 years. She survives with children, Catherine Norosky (Glenn) of Belpre, OH, William (Rhonda) of Follansbee, WV and Steven (Megan) of Marietta. He is also survived by three grandsons, Bradley and Connor Combs of Follansbee, WV and Henry of Marietta, OH. Fred was a member of the First Baptist Church of Marietta, the Fraternal Order of Elks, had served on the board of Marietta Memorial Hospital and was past president of the Spencer, WV Lions Club. His wishes were to be cremated and for his family to hold a private memorial service. The Marietta Chapel of Cawley & Peoples Funeral Home is honored to carry out his wishes and assist the family. If friends wish, they may make a donation to the Mid-Ohio Valley Humane Society, P.O. Box 5, Marietta, OH 45750.

Frederick E. Combs, Jr., 86, of Marietta, passed away at home on Tuesday, February 9, 2016, following a long illness. He was born in Spencer, WV on April 12, 1929 to Fred E. and Beulah Smith Combs. Fred graduated from Spencer High School and... View Obituary & Service Information

The family of Frederick Earl Combs created this Life Tributes page to make it easy to share your memories.

Send flowers to the Combs family.