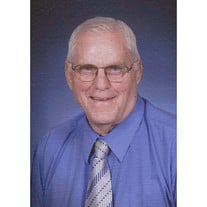 George Gale Binegar, 83, of Marietta, Ohio, died Thursday, July 7, 2016 in Wilmington, NC, of a massive heart attack. He was born on August 16, 1932, in Shay, Ohio, to Harry and Margaret Schneider Binegar. Gale graduated from St. Mary's Catholic High School, and then served his country in the Navy during the Korean Conflict. Gale retired from the Ohio Power Muskingum River Plant in 1994. He was a member of The Basilica of St. Mary of Assumption and the American Legion, Post 64. Gale was a very hard worker, and was always fixing things. He loved being outdoors and feeding his birds, but most of all, loved being active in his grandchildren's lives. He is survived by his wife, Mary Lou Miller Binegar, whom he married on March 2, 1957, three daughters, Debbie Kern (Melvin) of Marietta, Janet Binegar of Marietta and Judy Nohe of Wilmington, three grandchildren, Jeremy Kern of Marietta, Tiffany Croft of Nashville, TN, and Lacey Nohe of Wilmington, and many nieces and nephews. He was preceded in death by his parents, four brothers, Roy, Curtis, Bob and Chuck Binegar, five sisters, Dolores Abele, Wilma Fallon, Myrna Long, Regina Watson and Mary Podberger, and three infant siblings. Funeral Liturgy with Mass will be held at 10:00 a.m. on Wednesday, July 13, 2016 at the Basilica of St. Mary of Assumption, with the Rev. John Michael Campbell celebrating. Burial will follow at East Lawn Memorial Park, with full military honors. Visitation will be on Tuesday, from 2 to 4 and 6 to 8 p.m. at the Marietta Chapel of Cawley & Peoples Funeral Home, with a Vigil service at 3:00 p.m. Donations may be made to The Basilica of St. Mary of Assumption, 506 Fourth Street, Marietta, Ohio 45750.

The family of G. Gale Binegar created this Life Tributes page to make it easy to share your memories.

Send flowers to the Binegar family.