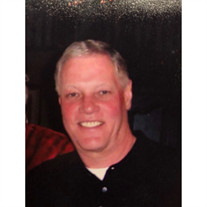 Gary Pfeffer, 74, of Marietta, Ohio, died Thursday, January 16, 2020, at his home, surrounded by his loving family. Gary suffered silently for years from Parkinsonism complications. He was born on January 22, 1945 in Barnesville, Ohio, to Gleason and Sarah Louise Pfeffer. Gary was raised in Barnesville and Coraopolis, PA. Gary came to Marietta in 1974 with Sperry Univac/Kardex Systems, where he spent over 20 years as Manufacturing Superintendent. He married Teri Ann Zide in November of 2000 and embraced the life of a retailer, working in many capacities in the family business, Teri Ann's. Gary was involved with United Way, O'Neill Senior Center, Marietta Chamber of Commerce Economic Development, American Cancer Society and was a member of The Basilica of St. Mary of the Assumption. He loved taking long drives, his yard and home, his family, his Teri Ann's girls and his faith. He is survived by his wife; his children, Tricia Hauan (James) of Fort Collins, CO, Jamie Pfeffer (Edie Hoback) of Nashville, TN and Courtney Massaro (Eric) of Huntington Beach, CA; grandchildren, James Trey Hauan, Jace Kai Hauan and Maxwell Christopher Massaro; siblings, Jeanine Triplett, Chris Pfeffer (Wanda), Harry Pfeffer (Susan); sisters in law, Shelly Medley (Rick), Missy Deskins (Elbert); brother in law Frank Zide (Jen); and many favorite nieces and nephews, especially Brittany and Zach Deskins. He was preceded in death by his parents, his brother Johnny Pfeffer, brother in law Jack Triplett and sister in law, Donna Pfeffer. Funeral Liturgy with Mass will be at 10:00 a.m. on Saturday, January 25, 2020 at The Basilica of St. Mary of the Assumption with The Rev. Msgr. John Michael Campbell celebrating. Visitation will be on Friday from 3 to 8 p.m., beginning with a Vigil service at 3:00 p.m. at the Marietta Chapel of Cawley & Peoples Funeral Home. Burial of his ashes will take place at a later date in New St. Mary's Cemetery in Marietta. Memorial contributions may be made to The Basilica or the Marietta Community Foundation. Cawley & Peoples is honored to serve Gary's family and offers online condolences and many other resources by visiting their website, CawleyandPeoples.com .

Gary Pfeffer, 74, of Marietta, Ohio, died Thursday, January 16, 2020, at his home, surrounded by his loving family. Gary suffered silently for years from Parkinsonism complications. He was born on January 22, 1945 in Barnesville, Ohio, to Gleason... View Obituary & Service Information

The family of Gary Francis Pfeffer created this Life Tributes page to make it easy to share your memories.

Send flowers to the Pfeffer family.