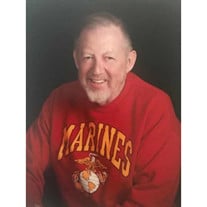 George Alan Pooler, 83, of Marietta, Ohio, died Wednesday, September 2, 2020, at Marietta Memorial Hospital. He was born on July 24, 1937 in Marietta, Ohio, to George Henry Pooler and Bertha Marie Hesson Pooler. George was a 1955 graduate of Marietta High School and attended Ohio University. He served his country in the U. S. Marine Corps and was a 50-year member of American Legion Post 64. George was in John F. Kennedy's funeral procession while he was in the Marines. He worked at General Electric as a Graphic Illustrator in the Technical Center, retiring in 1997. George was a member of St. John the Baptist Catholic Church in Chruchtown. He served his church as a reader, Eucharistic Minister, and taught religious education, marriage encounter programs and RCIA. He enjoyed playing in the Mel-Tones band for 30 years, was an artist, enjoyed painting, and had caricatures he created displayed all over the world. He is survived by his wife, Julie Ann Strozewski Pooler, whom he married on April 18, 1964; three children, Theresa Sauer (Benjamin), Matthew Pooler (Patrice) and Rebecca Plaugher (Dennis), all of Marietta; nine grandchildren, George, Ryan, Corey, Autumn, Alison, Adam, Carrie, Jasin and Juliann; five great grandchildren; two siblings, Marilyn Johnson and David Pooler (close friend, Dee); and many nieces and nephews. Visitation will be on Monday from 2 to 4 and 6 to 8 p.m. at the Marietta Chapel of Cawley & Peoples Funeral Home, with a Vigil service held at 3 p.m. Masks will be required and social distancing will be observed. Funeral Liturgy with Mass will be at 10:00 a.m. on Tuesday, September 8, 2020 at St. John the Baptist Catholic Church, with The Rev. David Gaydosik celebrating. Burial with full military honors will be observed in the church cemetery. Donations may be directed to St. John's for different religious education programs. Cawley & Peoples is honored to serve George's family and offers online condolences and many other resources by visiting their website, CawleyandPeoples.com.

The family of George Alan Pooler created this Life Tributes page to make it easy to share your memories.

Send flowers to the Pooler family.