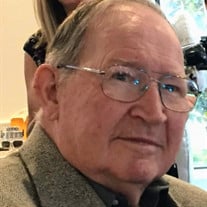 Gerald E. (Jerry) Littlefield, 87, of Marietta passed away Saturday, November 27 at Harmar Place in Marietta. Jerry was born on November 29, 1933 in Byron, Wyoming to Robert and Essie Littlefield. He was the youngest of 4 children. He earned a Bachelor’s Degree in Engineering from the University of Wyoming and began his career with Shell Chemical in 1955. He served in the Chemical Warfare Division of the US Army at Rocky Mountain Arsenal. On December 19, 1962 Jerry married Rita Mockler with whom he shared his life until her death in 2004. The family moved to Marietta, Ohio in 1977. Jerry retired from Shell Chemical in 1992 after 37 years. His assignments included work at facilities in Oregon, New Jersey, Texas, and Belpre, Ohio. Jerry was active in the Marietta community, having served in advisory capacities to the Washington State Community College Medical Technology program and the O’Neill Center Safety board. He also served on the St. Mary School Foundation and was a devoted volunteer with Habitat for Humanity. Jerry served on the Resident’s Board at Glenwood Community. In addition to his wife, Rita, Jerry was preceded in death by his parents, his siblings, Robert and Joseph Littlefield, Betty Long, and their spouses. He is survived by his son, Dan Littlefield; daughter Joan Morgan and her husband Kevin; three grandchildren, Sam, Maggie, and Monica Morgan; one sister-in-law, Katherine Rhodes; and numerous nieces and nephews. Visitation will be on Sunday from 4 to 6 p.m. at the Marietta Chapel of Cawley & Peoples Funeral Home, with a Vigil Service held at 4 p.m. Funeral Liturgy with Mass will be held at 10:00 a.m. on Monday, December 6, 2021 at The Basilica of St. Mary of the Assumption. Burial will follow in New St. Mary’s Cemetery, with full military honors. Donations may be directed to St. Mary’s School Foundation or to Habitat for Humanity in his memory. Cawley & Peoples is honored to serve Jerry’s family and offers online condolences as well as many other resources by visiting their website, CawleyandPeoples.com or by going to their Facebook page.

Gerald E. (Jerry) Littlefield, 87, of Marietta passed away Saturday, November 27 at Harmar Place in Marietta. Jerry was born on November 29, 1933 in Byron, Wyoming to Robert and Essie Littlefield. He was the youngest of 4 children. He earned... View Obituary & Service Information

The family of Gerald Eugene Littlefield created this Life Tributes page to make it easy to share your memories.

Send flowers to the Littlefield family.