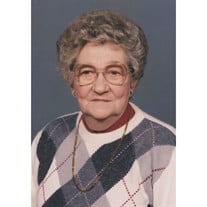 Gladys Laverne Decker, formerly of Lowell, Ohio, died Sunday, August 20, 2017, at Appletree Assisted Living in Beverly, Ohio. She was born on September 19, 1922, in Morgan County, to Huse H. and Martha Snider Barnes, the seventh daughter born to them. Laverne married Carroll J. Schantz on December 1, 1941, and one daughter was born to them, Carolyn S. Schantz. Carroll died on August 5, 1968. She later married Raymond Decker on September 28, 1974, he died on June 19, 1987. She was a member of St. John's Evangelical Church and the Church Guild, and she was a 55 year member and past Matron of O.E.S. Laverne attended Lowell High School. She loved gardening and cross stitching. Earlier in her life, Laverne worked for Fremars dress shop and Pete Bell's hardware store, in Beverly. She is survived by her daughter of Beverly; her grand dog, Miley; and several nieces and nephews, especially Jim and Cheryl Ullman. She was preceded in death by her parents; two husbands; seven sisters, Neota Miller Reed, Alta Loar, Muriel Brooks Gessel, Alma Vaughn, Lola Drake, Dorothy Wagner, and Lucille Ullman; and an infant brother. Funeral services will be held at 1:00 p.m. on Wednesday, August 23, 2017 at the Lowell Chapel of Cawley & Peoples Funeral Home, with Pastor Don Hart officiating. Burial will follow in Greenlawn Cemetery in Lowell. Visitation will be at the funeral home on Tuesday evening, from 5 to 7 p.m., with Eastern Star services being held at 7 p.m. Memorial contributions may be made to Marietta Home Health and Hospice, 450 Pike Street, Suite I-1, Marietta, Ohio 45750.

The family of Gladys Laverne Decker created this Life Tributes page to make it easy to share your memories.

Send flowers to the Decker family.