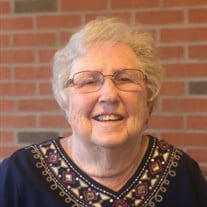 Gladys Ellen Schilling, 84, of Marietta, Ohio, died on Thursday, May 27, 2021 at Harmar Place in Marietta. She was born on December 11, 1936 in Waterford, Ohio, to Albert and Ella Huck Brooker. Gladys was a 1955 graduate of Lowell High School. She was a member of St. John the Baptist Catholic Church in Churchtown, the Catholic Women’s Club, Churchtown Senior Citizens and the Busy Bee Quilt Club. Gladys was a lifelong homemaker and loved spending time with family. She enjoyed quilting, rug making, baking and especially noodle making with her sisters. She is survived by three daughters, Melinda Treadway (Jerry) of Marietta, Patricia Finkel of Marietta and Trina Poythress (Dean) of Harrisburg, NC; five sons, Neil (Donna) of Marietta, Philip (Julie) of Findlay, OH, Troy (Teresa) of Marietta, Randy (Jessica) of Chillicothe, OH and Rodney (Erin) of New Marshfield, OH; 17 grandchildren, Tracie Roush (Jesse), Madalyn Treadway, Nicholas and Benjamin Finkel, Evan, McCaul and Brennan Schilling, Alexandria and Daniel Schilling, Taryn and Turner Schilling, Kendall and Landon Poythress, Travis and Samuel Schilling, Edwin and Grace Schilling; 7 step grandchildren; 3 great grandchildren; sister, Dorothy Gantley; 3 sisters in law, Anna Mae Brooker, Edith Brooker and Mary Brooker; and many nieces and nephews. She was preceded in death by her husband, Francis George “Frank” Schilling on April 25, 2021, they were married on October 14, 1959. She is also preceded in death by her brothers, George, Joe, Andrew, Edward, William, Paul, Benjamin, and Emmett Brooker; and sister, Rosemary Heiss. Funeral Liturgy with Mass will be held at 10:00 a.m. on Wednesday, June 2, 2021 at St. John’s Catholic Church in Churchtown, with The Rev. David Gaydosik celebrating. Burial will follow in the church cemetery. Visitation will be on Tuesday from 2 to 4 and 5 to 8 p.m. at the Marietta Chapel of Cawley & Peoples Funeral Home, with a Rosary prayed at 7:00 p.m. Donations may be made in her memory to St. John’s School Foundation, 17654 St. Rt. 676 or Marietta Home & Hospice, 27855 St. Rt. 7, both in Marietta, Ohio 45750. The Schilling family would like to give a special thanks to all of the staff of Harmar Place for their loving care. Cawley & Peoples is honored to serve Gladys' family and offers online condolences as well as many other resources by visiting their website, CawleyandPeoples.com.

Gladys Ellen Schilling, 84, of Marietta, Ohio, died on Thursday, May 27, 2021 at Harmar Place in Marietta. She was born on December 11, 1936 in Waterford, Ohio, to Albert and Ella Huck Brooker. Gladys was a 1955 graduate of Lowell High School.... View Obituary & Service Information

The family of Gladys Ellen Schilling created this Life Tributes page to make it easy to share your memories.

Send flowers to the Schilling family.