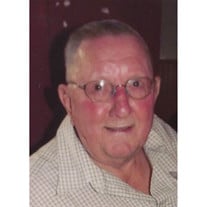 Harold Edward Weppler, 91, of Whipple, Ohio, died Tuesday, August 8, 2017. He was born on April 24, 1926 to Carl E. and Lillian Zimmer Weppler. Harold graduated from Marietta High School in 1948 and on October 25, 1948 he married Dora Marie Gerken. She preceded him in death on December 5, 2011. He was a WWII veteran, serving our country in the Army, where he served as Military Police. Upon return from the war, he purchased his own school bus, and drove bus routes in Stanleyville for a couple years. Harold was a farmer, and worked for Central Ohio Breeding Association. In 1969, he started driving bus for Marietta City Schools, where he retired from. Harold was Past Commander of American Legion, Post #64, where he was a member. He was also a member of the VFW, Post #5108, Marietta Shrine Club, Aladdin Shriners, Masonic Lodge, and Good Sam's Club (a camping organization). He is survived by two sons, Lynn (Christine) of Marietta, Randy (Cindy) of Whipple; one daughter, Dee (Tag) of Marietta; daughter in law, Bev Weppler of Whipple; nine grandchildren, Sherry (Tim) Wittekind, Michele (Gene) Paxton, Andrea (Bryan) Nichols, Evan (Tara) Wetz, Jason (Abby) Weppler, Scott (Melissa) Weppler, Derrick (Erica) Wetz, Lee (Kristin) Weppler, Lauren (Dan) Geissler; 18 great grandchildren, one great great grandchild; sister Juanita Hinkle of Marietta; and many nieces and nephews. He was preceded in death by his wife; son, Gary; brother, Carl L. Weppler; and sister, Verna Smithberger. Abiding with his wishes, he was cremated and a memorial will be held at the Marietta Chapel of Cawley & Peoples Funeral Home, from 10 a.m. to 12 p.m. on Saturday, August 12, 2017, with full military honors observed at 12:00 p.m. The family requests donations be made in his memory to the Fearing Twp. VFD, 1975 Stanleyville Road, Whipple, Ohio 45788

The family of Harold Edward Weppler created this Life Tributes page to make it easy to share your memories.

Send flowers to the Weppler family.