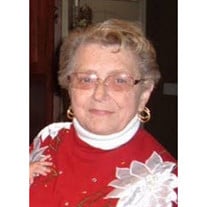 Hilda Laverne "Bernie" McNabb, 87, died Friday, June 3, 2016, in Akron. She was born March 20, 1929 in Akron, Ohio to Henry and Florence Stegner Eller. She graduated from Lowell High School in 1947 and married Philip Richard McNabb on November 10, 1947 in Russell, Kentucky. Bernie took early retirement from Union Carbide Corporation, Battery Products Division, in January of 1986, after twenty years in Sales Accounting and Employee Relations/Safety Departments. She had lived most of her life in Marietta except for almost four years in Lake Jackson, Texas, and the last six years in Akron. She had attended Cornerstone Free Methodist Church in Akron, Ohio. Bernie is survived by two daughters, Sandy Craig (Steve,) of Mt. Sterling, Ohio and Connie Lisiecki (Jerry), of Charlotte, Michigan; one son, Terry Philip McNabb (Marla), of Akron with whom she has made her home since 2010; five grandsons and seven great grandchildren. Also, relatives in Schupbach, Germany, birthplace of her father. She was preceded in death by her husband in 2003; her parents and one half sister. A special thanks to all the staff at Summa at Home Hospice, especially Mandy and Meghan. At Bernie's request there will be no visitation. There will be graveside services at Greenlawn Cemetery, Lowell, at 2:00 p.m. on Thursday, June 9, 2016. Donations may be made to ClearBlue Global Water Project, 578 Killian Rd., Akron, OH 44319, www.clearblueproject.com

The family of Hilda Laverne McNabb created this Life Tributes page to make it easy to share your memories.

Send flowers to the McNabb family.