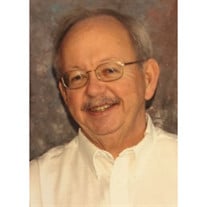 James Craig Covault, 66, of Marietta, Ohio, died Friday, January 1, 2016 at Marietta Memorial Hospital. He was born on September 20, 1949 in Detroit, Michigan to Stanley C. and Clara Louise Eddy Covault. James was a United States Veteran, serving his country during the Vietnam war. He graduated from Wayne State University in Detroit and then went on to get his certificate in Computer Science and Masters Degree, both from Marietta College. James retired as Director of Marketing in 2009 from Elpro Services in Marietta. During James' career as a cryogenic product manager he co published The Cryopreservation Manual - A Guide to Preservation Techniques. He was a member of the VFW and was an avid Harley Davidson rider, enjoyed boating and was a salt water tank enthusiast. He is survived by his wife, Laura Lawrence Covault, whom he married on August 30, 1984, four children, Kimberly McKenzie (Nick) of Crescent, Iowa, Adam Covault (Deborah) of Toledo, Michigan, Brandee Hofner (Marc) of Arlington, Massachusetts, and Jeffrey Covault (Katherine) of Columbus, Ohio, four grandchildren, Nicholas, Asher, Grady and Case, a brother, Gerry Covault of Katy, Texas, a sister, Lassie Covault of Harrison Township, Michigan, and many nieces and nephews. He was preceded in death by his parents and sister, Jay Ann Covault. Abiding with his wishes, private memorial services will be held at a later time. Memorial contributions may be made to the Disabled American Veterans by visiting their website, www.dav.org

The family of James Craig Covault created this Life Tributes page to make it easy to share your memories.

Send flowers to the Covault family.