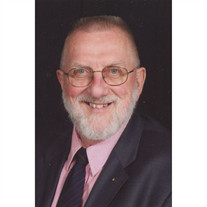 James "Pastor Jim" Delano Fernihough, 83, of Marietta, Ohio, went HOME Sunday, January 22, 2017 in Marietta. He was born on October 31, 1933, in McMechen, WV, to Charles and Alma Hollingsworth Fernihough. At a young age Jim moved with his mother to Bellaire, Ohio and was raised in the home of his grandparents, Chalmers and Bessie Hollingsworth. He worked at Imperial Glass Co. of Bellaire while in high school. Jim graduated from Bellaire High School with the class of 1951 and enlisted in the U.S. Navy, serving from 1951-1952 and in the U.S. Army from 1953-1956. Jim was married to the former Roberta "Bobbie" Caswell in 1953. She preceded him in death in 2005. He was employed as a telegraph operator for the B&O Railroad, was a boiler operator for the Beach Bottom Power Plant, and was a salesman for Holly Memorial Gardens Cemetery in Pleasant Grove, Ohio. Jim became a caseworker for the Belmont County Child Welfare Board in 1960 working there until 1963 when he and his family moved to Marietta. From 1963 to 1968 he was administrator of the School of Hope for Trainable Children and also started sheltered workshops in Belmont and Washington counties. In 1965 Jim was instrumental in obtaining a federal grant to establish a sheltered workshop for the mentally challenged in Belmont County. He was administrator for the Washington County Behavioral Health Board for a year and then became administrator for Athens County Behavorial Health Board from 1969 to 1971. Jim graduated from Steubenville College in 1966 with a BS in Education. He attended Ohio University and received his Masters in Education in 1976. Jim taught Occupational Work Experience at Fort Frye High School from 1971 until retiring from teaching in 1985. He then accepted a position as credit union manager at Washington County Credit Union. At that time, he was also doing substitute teaching at Washington County schools, Belpre schools and St. Marys, WV schools, teaching all subjects. In 1979, Jim was an International Teaching Fellow to Australia where he taught at Croxton Special School in Melbourne for a year. In 1990 he attended Garrett Evangelical Theological Seminary at Northwestern University in Evanston, IL and became an ordained minister. Jim served churches at Sarahsville, Olive Green, Caldwell and Macksburg, as well as St. Johns Evangelical Church in Lowell, where he served from 2002 until retiring in 2008. He was a Veterans Service Commissioner for Washington County from 2005 until retiring from there in 2015. Jim was an active member and past Commander of American Legion Post #64, and member of AMVets Post #1788. He belonged to Masonic organizations in West Liberty, WV, Lodge #26; member of the Knights Templar, Shrine Club, Order of Eastern Star and was a 32nd. Degree in Scottish Rites, Valley of Cambridge. Jim was also a member of Washington County Retired Teachers Association, having served as president of Ohio State Association. In 2008 he married his second wife, Suzanne Adams, who survives along with his son, Mark (Anna Marie) of Madison, IN; his daughter, Diane (Doug) Dennis of Marietta; grandchildren, Kathy Smith and Josh Fernihough of Louisville, KY, Justin (Cynthia) Dennis of Tunnel and Kaitlin Dennis of Marietta; great grandchildren, Storm and Rayn Griffin and Levi Dennis and his brother, David (Pat) Mayhew of Cockeyeville, MD. His extended family includes stepsons, Matt (Teresa) Adams of Belpre, Greg (Tammy) Adams of Arden, NC and Corey Adams (Amber Wilson) of Marietta; step grandchildren, Baylee, Silas, Marshall and Kiefer Adams. In addition to his first wife, he was preceded in death by his grandparents, parents and stepfather, Ken Mayhew. A celebration of Jim's life will be held at 11:00 a.m. Thursday, January 26, 2017, at the Marietta Chapel of Cawley & Peoples Funeral Home, with the Rev. Dick Poole, Jr. officiating. Friends may call on Wednesday from 2 to 4 and 6 to 8 p.m. Masonic services will be held at 7 p.m. on Wednesday at the funeral home. Burial will be at East Lawn Memorial Park with full military honors. Donations can be made in Jim's memory to the Reno VFD, P.O. Box 346, Reno, OH 45773. Jim loved his God, his country, his family, his friends, as well as trains, motorcycles, the Pittsburgh Steelers, Chinese food, and he had learned to love cats. There will never be another Jim Fernihough. If you were fortunate enough to have known him on this journey through life, be thankful. Jim's family would like to thank the critical care unit of Riverside Methodist Hospital and Dr. Lloyd Dennis and the Hospice Unit at Marietta Memorial Hospital for their professional and compassionate care of our loved one.

The family of James Delano Fernihough created this Life Tributes page to make it easy to share your memories.

Send flowers to the Fernihough family.