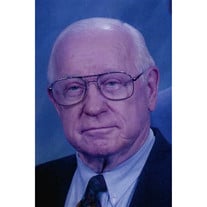 James Clifford Starner (Jim) passed away at his home in Marietta, OH on Father's Day June 21, 2020. A member of the Greatest Generation, he was born on October 25, 1925 at his family home in Sugar Grove, Ohio to the late Clifford and Esther Deeds Starner. Jim graduated from Berne Union High School where he served as class president all four years, and lettered in four varsity sports. Upon graduation he attended The Ohio State University where he played trumpet in the OSU marching band. During his first semester at OSU he received his draft notice to fight in World War II. After completing Army basic training, Jim joined the 17th Airborne paratroopers and fought in the Battle of the Bulge. Having survived a glider crash during Operation Varsity, he was later moved to the 82nd Airborne as a military police officer in Berlin. He participated in a track meet in the Olympic stadium in Berlin, and later returned home on the Queen Mary to the famous 1946 ticker tape parade in New York City. He then reunited with his high school sweetheart, Bette Miller, and they were soon married on December 16, 1948. Jim and Bette moved from Lancaster, Ohio to Marietta in 1956 to work in the trucking industry, where he eventually established Merchants 5 Star trucking company. Jim's love for the community was demonstrated by his work with the Marietta Rotary Club, where he was President, 2002 Rotarian of the Year, and recipient of two Paul Harris fellowship awards. Additionally he was a key founder of the Belpre Rotary Club. Jim was honored as the Marietta Area Chamber Business Leader Of The Year in 2003. He also was a member of the Ohio Trucking Association, American Legion Post 64, Mid-Ohio Valley Traffic Club, Y's Mens Club, Ohio Valley Ski Club, a charter member of the OSU Buckeye Club, and longtime member of Christ United Methodist Church. Jim was honored in the first class inducted into the Washington County Veterans Hall of Fame. Jim's friends and family remember spending many wonderful days with him: whether it be on the Marietta Country Club golf course, skiing under blue skies in Steamboat Springs, CO, or traveling to Columbus in the scarlet and grey Buckeye van to cheer on the Buckeyes at the Shoe, Jim always looked for the best and had a smile on his face. His legacy is perhaps best remembered by his strong faith in God and confirmation life verse from Matthew 28:20, "Teaching them to observe all things whatsoever I have commanded you: and, lo, I am with you always, even unto the end of the age." Jim is preceded in death by his parents. He is survived by his wife of seventy-one years, Bette Jean Starner; his two children, Jeffrey (Liane) Starner and Jill (Jim-deceased) Harry, both of Marietta; his three grandchildren, Rilla (Joseph) Cooper of High Point, NC, Raeann (Mitch) Boothe of Marietta, and Esther Starner of Marietta; his three great-grandchildren John, James, and Ezekiel Cooper of High Point; his step-granddaughter Amie (Randy) Reece and their son Elijah of Montgomery, Ohio; and his special friend Melvin Oliver. Calling hours will be observed from 4-8 PM on Thursday June 25 at the Marietta Chapel of Cawley & Peoples Funeral Home, 408 Front St., Marietta, where social distancing will be observed. A funeral will be held on Friday June 26 at 1 PM at Cawley & Peoples with Pastor Karen Muntzing officiating. Burial, with Military Honors, will follow at Forest Rose Cemetery in Lancaster, OH on Saturday at 11 AM, with friends and relatives welcome to attend. Memorial contributions may be made in Jim's name to Christ United Methodist Church, 301 Wooster Street, Marietta, OH 45750. Cawley & Peoples is honored to serve the Starner family, offering on-line condolences and many other resources by visiting CawleyandPeoples.com.

James Clifford Starner (Jim) passed away at his home in Marietta, OH on Father's Day June 21, 2020. A member of the Greatest Generation, he was born on October 25, 1925 at his family home in Sugar Grove, Ohio to the late Clifford and Esther... View Obituary & Service Information

The family of James Clifford Starner created this Life Tributes page to make it easy to share your memories.

James Clifford Starner (Jim) passed away at his home in Marietta,...

Send flowers to the Starner family.