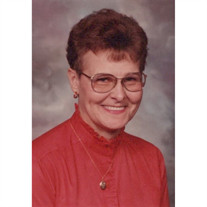 Janet K. Graham Goddard Fortney died December 11, 2020 at Marietta Memorial Hospital from complications of COVID-19. Janet was born on September 25, 1935 to Roger G. and Thelma P. (Cox) Graham at Bartlett, OH. She was a 1953 graduate of Bartlett High School. Janet and C. Ason Goddard were married May 21, 1953 at Bartlett, OH. Later, while both working full time, they opened and operated the Darietta in Beverly, OH. Ason died of a brain tumor in 1966. Janet was employed by Washington County, in the Auditor's office and later as Clerk for the County Commissioners. She continued serving the public when employed as the first female dispatcher with the Marietta Post of the Ohio State Highway Patrol. Janet married Gary D. Fortney, son of Charles L. and Myrtle O. (McCray) Fortney on May 5, 1969 in Williamstown, WV. Not long thereafter, they moved to Arizona, worked and continued their education at Northern Arizona University at Flagstaff, AZ. They moved to the Hopi Indian Reservation, in 1971, where Gary taught school on Second Mesa and Janet worked as an aide, there until 1974. Janet received her Bachelor of Arts degree in Education in 1975 and her Masters in 1981, both from NAU. Returning to Ohio, she taught Special Education in the Fort Frye School District for more than 22 years. She was a member of the Ohio State Teachers Association. She retired from teaching, and had loved doing it. She was respected and loved by many of her co-workers, meeting regularly until recently. Janet and Gary both retired, moved back to their home in Arizona. When friends or family visited, a puzzle was on the table to piece together, and have good conversation. She enjoyed playing cards, reading, watching her favorite teams and westerns on TV, and showing visitors sights around the area. She is survived by her husband, Gary, of 51 years; two step-daughters Marsha S. Ciatta (Tony); and Malinda D. Robinson (Dennis) and granddaughters Alexandria, Lyndsey and Quinn. Also surviving are brothers, Richard A. (Patty Jo) Graham; Gary R. (Becky) Graham; sister Beverly (Michael) Elkins; brother in law Richard N. Proctor, and one uncle, Elbert J. (Shirley) Cox (Elbert died June 14, 2021); twelve nieces and nephews; thirty -one great nieces and nephews, fourteen great-great nieces and nephews, and another one on the way. Janet was preceded in death by her parents, her father and mother in law, sister Helen B. Graham Bailey; niece Sarita L. Strode; nephews: G. Edward (Ed) Graham, Steven N. Proctor, Barry Fortney; great niece Jessica E. Proctor; brothers and sisters in law: Charles E. and Ann Fortney, Kenneth P. (Tink) and Betty Fortney, Vivian M. (Fortney) and William V. Bowden, and Nelma (Sis) (Fortney) Proctor. Janet loved God, families, and friends, near and far, keeping in touch with them until her last illness. The families of Janet want to thank Kumudha Rajeswaran, M.D. and the fourth floor staff for the care and support in her final days and hours. Another thank you goes to John Fortney who kept both families up to date on both Janet and Gary's medical conditions. Private graveside services will be held at the convenience of the family in the Bartlett Cemetery at a later date. Donations in her memory may be made to the Bartlett United Methodist Church, c/o Christine VanOster, 2530 Clark Road, Cutler, OH 45724. Cawley & Peoples is honored to serve Janet's family and offers online condolences as well as many other resources by visiting their website, CawleyandPeoples.com.

The family of Janet Kay Fortney created this Life Tributes page to make it easy to share your memories.

Send flowers to the Fortney family.