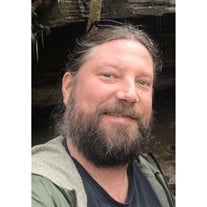 Jason Stephen Albrecht passed away suddenly at work on Wednesday, April 8 just seven days after his 42nd birthday. He was deeply loved by his family and friends. Born April 1, 1978, he was the oldest of three children born to Stephen Edward and Jean Boughton Albrecht of North Myrtle Beach, South Carolina. Jason attended Marietta High School and Marietta College during his high school years, graduating in 1996. He was the first Marietta High School soccer player to make the ALL OHIO division one team. He graduated from Colorado College in the year 2000 with a degree in geology. He followed his passion for helping others and became a teacher at Colorado Community College for five years, teaching the ancient art form of Batik, before returning to Marietta. Jason was a simple man; he experienced more than most through his many world travels, never meeting a stranger along the way. He had a charming and magnetic personality. Drawing in many people who loved and adored him. Jason brought inspiration, love and light to all who were blessed to know him throughout his life. He cherished his love and connection to his parents, sister, brother, fiancée and many friends. He saw value in nature's beauty in ways most don't. He is such an inspiration to all who know and love him. Jason's laugh was contagious, his smile would light up a room, his love was deep, loyal and passionate, his soul was bright, beautiful, adventurous, compassionate, wise and kind. Among many other beautiful things, he was an artist, a philosopher, great skier and was interested in the wonderful mysteries of the world with a deep connection with nature and people. He wrote about and studied at length the beauty, complexity, and mystery of the dendritic pattern. He had a passionate hunger for knowledge, studying and learning a wide variety of topics throughout his life. Jason also had the ability to make others feel safe allowing them to openly share their fears with him, he in turn validated their feelings with ease, understanding and compassion. He is survived by his parents Stephen Edward and Jean Boughton Albrecht of North Myrtle Beach South Carolina, his sister Kimberly Anne Albrecht of Marietta, brother Jeremy Silliman Albrecht and his wife Courtney Albrecht and nieces Stella, Evelyn, and Scarlett Albrecht of Westerville, OH, and his fiancée, Tiffany Neill of Marietta. A celebration of life will be held in Canaan Valley, WV and will be announced at a later date. Cawley & Peoples Funeral Home is honored to serve Jason's family and offers online condolences and many resources by visiting, www.cawleyandpeoples.com.

Jason Stephen Albrecht passed away suddenly at work on Wednesday, April 8 just seven days after his 42nd birthday. He was deeply loved by his family and friends. Born April 1, 1978, he was the oldest of three children born to Stephen Edward... View Obituary & Service Information

The family of Jason Stephen Albrecht created this Life Tributes page to make it easy to share your memories.

Jason Stephen Albrecht passed away suddenly at work on Wednesday,...

Send flowers to the Albrecht family.