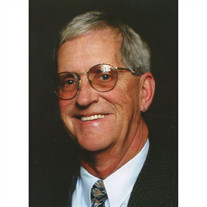 John Frederick Amrine, 66, of Cutler, died Tuesday morning, February 3, 2015. He was born February 25, 1948 in Marietta to the late Frank B. Amrine, Jr. and Virginia Anne "Ginny" Murray Amrine of Marietta. He was a 1966 graduate of St. Marys High School, which was the last graduating class there. He was a U.S. Army veteran of Vietnam. John had worked for Airolite for 25 years, then for ATOMS Architectural Products. He was a member of American Legion, Post #64, VFW, Post #5108, the 40 et 8 and AmVets. John was an avid golfer, playing in the American Legion League and was a big OSU fan. Most of all he enjoyed spending time with family and especially the grandchildren. In addition to his mother, he is survived by his wife, Tonia Kephart Amrine; ten children, Kerensa Duffey (James) of Marietta, Shannon Campbell (Jerry) of Athens, Jessica Yost (Justin) of Cutler, Ehren Amrine (Stephanie) of Marietta, Timothy Amrine (Chesska) of Marietta, Autumn McGregor (Malcolm) of Hampton, VA, Whitney Keller (Wesley) of Marietta, Jacob Amrine of Cutler, Peyton Amrine of Waterford and Gillian Amrine of Cutler; 23 grandchildren; seven siblings, Mary Groves (William) of Marietta, Michael (Heike) of Scottsdale, AZ, Frank (Jo Ellen) of Moore, SC, Patrick of Waterford, Timothy (Lori) of Marietta, James (Karen) of Marietta and David of Cincinnati and many nieces and nephews. Funeral Liturgy, with Mass, will be held at 10:00 a.m. on Friday, February 6, 2015, at the Basilica of St. Mary of the Assumption, with the Rev. Msgr. John Michael Campbell as celebrant. Friends may call on Thursday from 2 to 4 and 6 to 8 p.m. at the Marietta Chapel of Cawley & Peoples Funeral Home. Burial with be at East Lawn Memorial Park with full military honors. Donations may be made in John's memory to VFW Post 5108, P.O. Box 222, Marietta, OH 45750.

John Frederick Amrine, 66, of Cutler, died Tuesday morning, February 3, 2015. He was born February 25, 1948 in Marietta to the late Frank B. Amrine, Jr. and Virginia Anne "Ginny" Murray Amrine of Marietta. He was a 1966 graduate of St. Marys... View Obituary & Service Information

The family of John Frederick Amrine created this Life Tributes page to make it easy to share your memories.

Send flowers to the Amrine family.