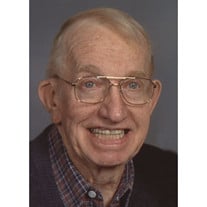 John J. Schoeppner, 91, of Marietta, died July 4, 2016 at his home. He was born November 25, 1924 in Harriettsville, Ohio to Edward and Rose (Estadt) Schoeppner. John graduated from Elk High School in 1942. He served in the U.S. Army with the 75th Infantry Division during WWII in the European Theater Operation. After the war, John was employed at Marietta Concrete and Kardex from which he retired in 1990. He was a lifetime member of the VFW Post 5108 and American Legion Post 64. He served on the Harriettsville School Board. John enjoyed playing basketball, baseball, fast pitch softball and was on many bowling leagues throughout the years. He coached youth basketball and baseball and kept the score clock for Skyvue High School for several years. John is survived by his wife, Ethel Rose Schott Schoeppner, whom he married on September 10, 1949, daughters, Sandra (Dave) Walker of Galena, Ohio, Mary (Tom) Kunz and Barbara (Tom) Binegar of Marietta, son-in-law, Chuck Marshall and daughter-in-law, Twila Schoeppner. John and Ethel have 11 grandchildren, Sara and Kevin (Stacey) Walker, Rob (Amy) Marshall, Jodi (Chris) Boyd, Joshua and Jonah (Jessie) Kunz, Jaime (Leo) Raffinengo, Erik and Robbie Schoeppner, Tim (Stacy) Binegar and Tracy (Kirk) Huggins. They also have 16 great-grandchildren, Logan Weber, Layne and Leah Marshall, Eli and Sam Boyd, Austin, Jordan, Gavin and Cohen Kunz, Christian, Max, Alex and Evan Raffinengo, Brendan and Caden Binegar and Finnegan Huggins, and many nieces and nephews. He was preceded in death by his son, Robert John "Bob" Schoeppner, daughter, Linda L. Marshall, granddaughter, Christa Schoeppner Herbert, and great-grandson, Theo Binegar Huggins, along with his parents, brothers, Clarence, Elmer, Harold, Sam and Edward, and sister, Thelma Crum. The Schoeppner family would like to convey a special thank you to Interim Healthcare, Hospice and the VFW. Funeral Liturgy with Mass will be held at 10:00 a.m. on Friday, July 8, 2016 at The Basilica of St. Mary of the Assumption, with the Rev. Msgr. John Michael Campbell celebrating. Burial will follow in East Lawn Memorial Park. Visitation will be on Thursday, from 2 to 4 and 6 to 8 p.m. at the Marietta Chapel of Cawley & Peoples Funeral Home, with a Vigil service held at 3:00 p.m. Memorial contributions may be made to the VFW, Post 5108, 319 Pike Street, Marietta, Ohio 45750.

John J. Schoeppner, 91, of Marietta, died July 4, 2016 at his home. He was born November 25, 1924 in Harriettsville, Ohio to Edward and Rose (Estadt) Schoeppner. John graduated from Elk High School in 1942. He served in the U.S. Army with the... View Obituary & Service Information

The family of John J Schoeppner created this Life Tributes page to make it easy to share your memories.

Send flowers to the Schoeppner family.