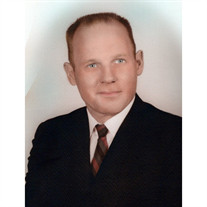 Joseph Leo Muntz, 93, of Marietta, Ohio, died Sunday, February 16, 2020 at Marietta Memorial Hospital. He was born on April 2, 1926 in Waterford, Ohio, to Fred and Matilda Arnold Muntz. Joe served his country in the United States Army during WWII. He worked at Union Carbide/Elkem until his retirement in 1982, and then delivered for Dudley's Florist for many years. He was a member of The Basilica of St. Mary of the Assumption, where he was an usher and strong in his faith, Warren VFD and Pioneer Antique Club. Joe loved camping, antique cars, and spending time with his family and friends. He always had a smile and a hug for anyone he saw. He is survived by his wife, Ruth Ann Davis Muntz, whom he married on April 12, 1948; two sons, Fred (Teresa) and John (Debbie); grandchildren, Bryan (Vivian), Michelle Richards (Jeff), Amanda Muntz, Isaac (Lindsey) and Timothy (Amber); great grandchildren, Vanessa, Makayla, Skyler, Jesse, Ava, Sophia, Isley and Ethan; daughter in law, Sharon Muntz; brother, Paul; and many nieces and nephews. He was preceded in death by his son, Mike; brothers, Wibb and Dale; and sister, Helen Dye, Leila Murray, Leona Muntz and Mary Papst. Funeral Liturgy with Mass will be held at 1:00 p.m. on Thursday, February 20, 2020, at The Basilica of St. Mary of the Assumption, with The Rev. Msgr. John Michael Campbell celebrating. Entombment will follow in East Lawn Mausoleum. Visitation will be on Wednesday from 2 to 4 and 6 to 8 p.m. at the Marietta Chapel of Cawley & Peoples Funeral Home, with a Vigil service held at 3:00 p.m. Cawley & Peoples is honored to serve Joe's family and offers online condolences and many more resources by visiting their website, CawleyandPeoples.com.

The family of Joseph Leo Muntz created this Life Tributes page to make it easy to share your memories.

Send flowers to the Muntz family.