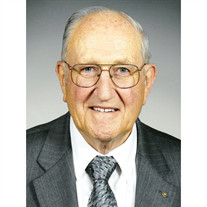 Joseph H. Wesel, 86, of Marietta died Monday February 29, 2016 in Marietta, Ohio. He was born May 2, 1929 in Marietta to William Francis and Genevieve Catherine Smithberger Wesel. He was a graduate of St. Mary's Catholic High School. A veteran of the U.S. Air Force, having served during the Korean Conflict from 1952 to 1954, he graduated from Scott Field Radio School and served a year in French Morocco with 4th Radio Relay. Joe was Catholic by faith and will be deeply missed by his loved ones, including his wife of over 61 years Luada Elaine Wesel; seven children: daughter Anne Keegan (Joseph); son Joseph Henry II (Kathryn), all of Marietta; daughter Catherine Whelchel (Richard) of Spartanburg, SC; son David (Marcy) of Marietta; daughter Marilyn of Silver Lake, OH; son Michael of Lakewood, OH; son Richard (Ellen) of Los Angeles, CA; 19 Grandchildren: Jennifer Bird (Andy), Milwaukee, WI; Nathan Keegan, Boston, MA.; Benjamin Keegan, Chicago, IL; Megan Keegan, Philadelphia, PA ; Joseph Henry Wesel III (Kim) Gahanna, OH; Evelyn Wesel, Tampa, FL; Steven Wesel, San Diego, CA; Jackson and Patricia Wesel, Marietta; Erica Adams, Atlanta, GA; Catherine Adams, Pittsburgh, PA; Andrew Adams, Spartanburg, SC; Alexander and Olivia Wesel, Marietta; Ethan and Jason Wesel, Brecksville; Kevin, Emily, and Andrew Wesel, Los Angeles, CA.; two great-grandchildren: Joseph Henry Wesel IV and Catherine Bird; sisters, Catherine Dickson (Robert) and Mary Agnes Augenstein (Joseph), sister-in-law, Sally Wesel; brother-in law, Cecil Cline and sister-in-law, Grace Oppe, numerous nieces and nephews. He was preceded in death by daughter Lisa Marie in 2002, and brother Charles (Bill) in 2015. Born at 181 Front Street, above the family business, Joe started helping his father at a young age. His father passed away when Joe was 16 years old and he worked at Marietta Ignition with his Mother and cousin Charles Morrison, while living above the store. His only time away from the business was during his service in the Air Force. Joe worked diligently and tirelessly with his family to build the business from a small machine shop and parts store to a multi-state regional operation. With only a high school education, Joe was a self -educated man and instilled a desire for higher education in his children and grandchildren. He was very proud of their academic accomplishments. Mr. Wesel served as Vice President and General Manager of Marietta Ignition, Inc. from 1954 to 1977, and President and General Manager from 1977 to 1983. He then served as President and Chairman of the Board of Marietta Automotive Warehouse, Inc. from May 1983 to 2001. Joe was President of Auto Paint Works, Inc. (formerly DA Kuhn Co.) from 1973 to 2001, and President of W.D.A., Inc. from 1954 to 2011. He served as a Member of the Board of Directors of Ohio Automotive Wholesalers Association from 1973 to 1989, serving as President in 1979. Elected to the Board of Directors of The Peoples Banking and Trust Company in January 1974, he served over 36 years until November 2010. He also served over 30 years on the Board of Directors of Peoples Bancorp from April 30, 1980 to November 2010. He served as Chairman of the Board from 1991 until June 30, 2003, and again from June 2005 to June 30, 2008, and was elected as Vice Chairman of the Board from July 1, 2003 to June 9, 2005. Always committed to children, Joe willingly served his community. As the longest standing member of the Board of Directors of Washington County Children Services Board, he served over 36 years, from April 1973 to December 30, 2009, including three terms as President in 1977, 1988 and 2003. He enjoyed coaching Little League Baseball for 13 years. Elected to St. Mary's Parish Council from 1969 to 1972, and from 1976 to 1979, Joe was Chairman of the Capital Fund Drive for the 1972 major church renovation. In addition, he served on the Parish Finance Council for many years. He was a member of the Board of Directors of Marietta Area Chamber of Commerce from 1969 to 1974, and was Membership Chair from 1969 to 1971. He was a Member of the Marietta Development Advisory Committee from December 1974 through December 1978. He served on the Board of Directors of Restoration '76. He was a Member of the Board of Directors of Community Improvement Corporation from January 1973 to 1990, and was President 1986-87. He acted as General Chairman of the 1982-83 United Way Drive, serving as a Division Head for three years. A member of Rotary International, he enjoyed the additional opportunity for service. He was a life member of American Legion Post 64, VFW Post 5108, and K of C Council #478, where he was a member of the Fourth Degree. Mr. Wesel was honored with the Marietta Jaycees Outstanding Citizen of the Year in 1972, the Civitan Club Citizen of the Year in 1982, and together with his brother Bill, the Chamber of Commerce Businessman of the Year in 1989. Joe's family extends sincere thanks to Dr. Michael Brockett; his caregivers, Pam, Charlie and Susie; the staff at Harmar Place; and Marietta Home Health and Hospice. Funeral Liturgy, with Mass, will be at 10:00 a.m. on Monday, March 7, 2016, at the Basilica of St. Mary of the Assumption, with the Rev. Msgr. John Michael Campbell as celebrant. Burial will be at New St. Mary's Cemetery, where full military rites will be observed. The family will greet friends at the Marietta Chapel of Cawley & Peoples Funeral Home on Sunday from 1:00 to 4:00 and 6:00 to 8:00 p.m. There will be a Vigil Service at 3:00 p.m. Sunday, at the funeral home.

Joseph H. Wesel, 86, of Marietta died Monday February 29, 2016 in Marietta, Ohio. He was born May 2, 1929 in Marietta to William Francis and Genevieve Catherine Smithberger Wesel. He was a graduate of St. Mary's Catholic High School. A veteran... View Obituary & Service Information

The family of Joseph Henry Wesel created this Life Tributes page to make it easy to share your memories.