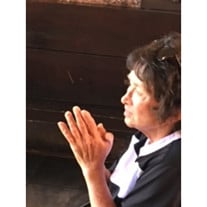 Joyce Ann Lang, 63, of Marietta, died Friday, March 5, 2021, in Marietta. Born in Marietta on April 3, 1957, she was a daughter of Gerald Andrew and Martha Bauerbach Lang. Joyce had attended Ewing School from age 5 to 18. After graduation she worked at WASCO for many years. During her years at Ewing, she participated in Ohio Special Olympics sporting events. She had benefited from the services provided by the O'Neill Senior Center. Joyce enjoyed family gatherings and looked forward to annual reunions and holidays. She could be seen often walking around Marietta, catching the bus at the courthouse to go shopping and having lunch with her good friend Kim Loar. Joyce enjoyed going to mass regularly at the Basilica of St. Mary of the Assumption. She would often attend mass with her cousin Betsy Lang or longtime friend Kathy Wetzel. Betsy and Kathy outings was something Joyce greatly enjoyed and would talk about for days. Smitty's was her favorite place to eat; Joyce befriended many of the employees there. Joyce was very social and was always more concerned about how you were doing, then how she was doing herself. She is survived by her mother, Martha Hunter (Don Parmiter), of Marietta; two sisters, Tammie Farmer (Roger Ketchum), of Hockingport, and Ann Clark (Ivan), of Boardman; her brother, Rick Lang (Denise), of Waterford; six nephews, Brent and Josh Farmer, Austin and Tyler Clark, Jamie and Jared Lang; and by eight grand nephews and nieces. Joyce was preceded in death by her father and a brother-in-law, Greg Farmer. Funeral Liturgy, with Mass will be 10:00am Monday, March 8, 2021, at the Basilica of St. Mary of the Assumption, with The Rev. Monsignor John Michael Campbell celebrating. Following the funeral service, Joyce's family will greet friends at a reception being held at the Knights of Columbus, 312 Franklin Street, in Marietta. Memorial donations may be directed to the O'Neill Senior Center, 333 Fourth St., Marietta, OH 45750. Cawley & Peoples Funeral Home is honored to serve the Lang family, offering on-line condolences and many other resources by visiting CawleyandPeoples.com.

Joyce Ann Lang, 63, of Marietta, died Friday, March 5, 2021, in Marietta. Born in Marietta on April 3, 1957, she was a daughter of Gerald Andrew and Martha Bauerbach Lang. Joyce had attended Ewing School from age 5 to 18. After graduation she... View Obituary & Service Information

The family of Joyce Ann Lang created this Life Tributes page to make it easy to share your memories.