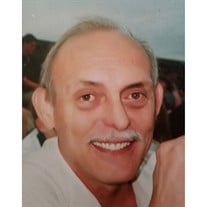 Larry Dale Carver, 67, of Marietta, Ohio, died Monday, May 28, 2018 at Marietta Memorial Hospital, surrounded by his loving family. He was born on December 21, 1950, in Marietta, to Sam and Elizabeth Seyerle Carver. Larry was a graduate of Marietta High School and he received two Associate Degrees in Mechanical and Electrical Engineering from Washington State Community College. He was a Vietnam Veteran serving his country in the United States Army. Larry retired as a Draftsman from Thermo Fisher in 2013 after 42 years of employment. He loved spending time with his family, tinkering in his workshop, and morning coffee with his buddies. His grandkids always thought Papa could fix everything, and he did. He was always willing to give anyone a helping hand. He is survived by his wife, Suzanne Mayer Carver, whom he married on June 6, 1970; two daughters, Melissa Carver (Dan Neville) and Amy Grosklos (Jason); six grandchildren, Ashley Dye (John), Stephaney Kirby (Jason), Tanner Leach, and Derek, Deven and Logan Grosklos; four great grandchildren, Aubrey, Jacob and Amelia Dye, and Sophia Kirby; two sisters, Martha Simon and Alberta Ortiz; and several nieces and nephews. He is also survived by his sisters in law, Mary, Joan, Kathy Mayer and Patricia DeMaio (Don) and brother in law, John Mayer (Roberta). He was preceded in death by his parents, six brothers and one sister. Funeral Liturgy with Mass will be held at 10:00 a.m. on Friday, June 1, 2018 at The Basilica of St. Mary of the Assumption. Burial will follow in New St. Mary's Cemetery. Visitation will be on Thursday, from 4 to 8 p.m. at the Marietta Chapel of Cawley & Peoples Funeral Home. In lieu of flowers, his family asks that donations be made to OGVC, "Give a Veteran a Car", 130 Second Street, Marietta, Ohio 45750.

Larry Dale Carver, 67, of Marietta, Ohio, died Monday, May 28, 2018 at Marietta Memorial Hospital, surrounded by his loving family. He was born on December 21, 1950, in Marietta, to Sam and Elizabeth Seyerle Carver. Larry was a graduate of... View Obituary & Service Information

The family of Larry Dale Carver created this Life Tributes page to make it easy to share your memories.

Send flowers to the Carver family.