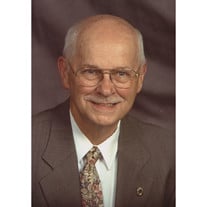 Lawrence "Larry" Paul Steinel, Jr., 82, of Marietta, Ohio died on October 29, 2019 at his residence. He was born on September 6, 1937, on the family farm in Akron, Ohio, the son of Lawrence Sr. and Marvel Steinel. Immediately after graduation from Greensburg High, Larry joined the U.S. Coast and Geodetic Survey. Graduated from the Electronics Institute of Akron, he spent the next six years as regional manager for the St. Louis Terminal Field Warehouse. He eventually began his career in radio as a disc jockey and newsman in Akron and Cleveland. In 1961, he moved to the Marietta Area, where he spent several years as morning disc jockey and general manager of WMOA Radio. In 1974, he married Janet Aline Pottmeyer. Along with his wife, he opened and operated Uniglobe Marietta Travel, and later added Hertz Car Rental to their corporation. Together they owned and operated several travel agencies in Ohio and WV, along with Century 21 Real Estate franchises. In 1997 he began the first of two terms as Commissioner of Washington County. Through the years he was a member of The Basilica of St. Mary of the Assumption. He was an active participant in many community organizations, including the Marietta Noon Lions Club, Marietta Area Chamber of Commerce, Marietta Tourist and Convention Bureau, Easter Seal Society of SE Ohio, NCAA Division III Baseball World Series Corp., Mid-Ohio Valley Chapter of American Marketing Association, Marietta High School Band Boosters, Marietta Board of Realtors and Uniglobe Owners Assn. For over 50 years, Larry was the public address announcer for Marietta College Pioneer sports, "The voice of the Pioneers". He is survived by his wife, Janet; children, Jeff of Lowell, Michael (Lynne) of Louisville, KY, Scott (Mary Beth) of Lowell, Juli of Oregon, Ohio, Amy (Jason) Huck, and Adam, both of Marietta, and several grandchildren and great grandchildren. Funeral Liturgy with Mass will be held at 10:00 a.m. on Monday, November 4, 2019 at The Basilica of St. Mary of the Assumption, with The Rev. Msgr. John Michael Campbell celebrating. Burial of his ashes will follow in St. John's Cemetery in Churchtown. At Larry's request, there will be no visitation. Everyone is invited to lunch at The Basilica following the burial. His family suggests that contributions in Larry's memory be made to the Alzheimer's Association, 8180 Greensboro Drive, McLean, VA 22102 or online at alz.org. The Marietta Chapel of Cawley & Peoples Funeral Home is honored to assist Larry's family with cremation services, and offers online condolences and many more resources by visiting their website, CawleyandPeoples.com .

Lawrence "Larry" Paul Steinel, Jr., 82, of Marietta, Ohio died on October 29, 2019 at his residence. He was born on September 6, 1937, on the family farm in Akron, Ohio, the son of Lawrence Sr. and Marvel Steinel. Immediately after graduation... View Obituary & Service Information

The family of Lawrence Paul Steinel created this Life Tributes page to make it easy to share your memories.

Send flowers to the Steinel family.