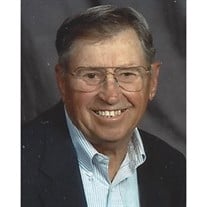 Louis E. Huck, Jr., 89, passed away peacefully at his home with family by his side on Thursday, May 10, 2018. Louis Edward Huck, Jr. was born in Marietta, Ohio on October 4th, 1928 to the late Louise Anna Burkhart and Louis Edward Huck. Louis attended Putnam Elementary School and graduated from Marietta High School in 1946. He was active in Future Farmers of America and the Putnam 4-H Club, later becoming a 4-H Advisor. Following high school graduation, Louis enrolled in The Ohio State University College of Agriculture in Columbus, Ohio. During his two years at OSU, he was active in Alpha Gamma Sigma agriculture fraternity and ROTC. Telling his family, "it's in my blood," Louis joined his father and brother on the family farm in 1948, doing business as L.E. Huck and Sons. He and his brother Francis were the third generation of their family to farm the land around Masonic Park in Devola. They grew potatoes, cabbage, tomatoes, sweet corn, peppers and cucumbers for distribution through the Marietta Truck Growers co-op. With the rise of chain supermarkets, farmers began to specialize in order to serve larger customers. L.E. Huck and Sons became known for Superior Brand Potatoes. Harvesting the crop and getting it to market in a timely manner required more summer help, creating summer job opportunities for local youth. Louis welcomed anyone who worked as hard as he did. Many of those young workers became friends for life. Under Louis' leadership, L.E. Huck and Sons launched Huck's Farm Market and Huck's Greenhouses in the mid-1980s, both of which were eventually spun off to be run by his sons as separate businesses. After returning to Marietta to work the land he loved full-time, he proposed to his high school sweetheart, Betty June Carver. They were married on October 23rd, 1949. As he settled into family life, Louis became active in the Marietta Jaycees and the Knights of Columbus. He was proud to be a lifelong member of the Devola Community and Basilica of Saint Mary of the Assumption. Louis and his family were honored to receive the Marietta Area Chamber of Commerce's Agricultural Award in 1999. Louis was active on several professional boards including the Ohio Potato and Vegetable Growers Association, the Ohio Potato Growers Association, and Marietta Truck Growers. He also served on the Farm Credit Advisory Board. Louis is survived by Betty June, his wife of 68 years; his daughter Cindy (Mike) Pyles, sons Mike (Susan), Jay (Tracey), and Joe (Ann), all of the Marietta area; six grandchildren, John Pyles (Rachel), Sarah Miller (Dave), Jessie, Adam, Abby, and Austin (Tori) Huck; five great-grandchildren, Camryn June and Vince Parks, Ben and Lucas Pyles, and Ryan Miller; sister-in-law Joan Milsark Huck and several nieces and nephews; and Patrick, his devoted little dog. He was pre-deceased by his parents, his brother Francis, sisters Mary Catherine, Regina, and Pauline. Funeral Liturgy, with Mass will be held 10:00 am Tuesday, May 15, 2018 at the Basilica of Saint Mary of the Assumption, with The Rev. Monsignor John Michael Campbell as Celebrant. The family will greet friends at the Marietta Chapel of Cawley & Peoples Funeral Home on Monday, from 2-4 and 6-8 pm, where a Vigil Service will be at 3:00 pm. Mr. Huck will be laid to rest in Putnam Cemetery-about one long potato row from the family farm-near the place where the big tree he played under as a child once stood. The family extends its gratitude and sincere thanks to Dr. Kelli Cawley, everyone at the Strecker Cancer Center, The Pines, Amedisys Hospice, Lois Hasley and her team of caregivers, Dr. Mike Brockett and family, and to Mr. Huck's many friends for their support during a very difficult time. The family requests that memorial gifts be made to the Basilica of Saint Mary of the Assumption or the Strecker Cancer Center.

Louis E. Huck, Jr., 89, passed away peacefully at his home with family by his side on Thursday, May 10, 2018. Louis Edward Huck, Jr. was born in Marietta, Ohio on October 4th, 1928 to the late Louise Anna Burkhart and Louis Edward Huck. Louis... View Obituary & Service Information

The family of Louis E Huck created this Life Tributes page to make it easy to share your memories.

Send flowers to the Huck family.