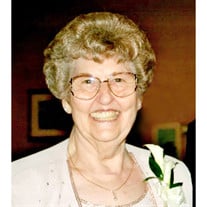 Luada Elaine Cline Wesel, 87, of Marietta died Tuesday, October 2, 2018 in Marietta, Ohio. She was born March 5th, 1931 in Wingett Run, Ohio to David Thomas Cline and Alice Elizabeth Wallenfelsz Cline. She graduated as the valedictorian of her class at Ludlow Local High School and attended Ohio University. She was a proud member of the Daughters of the American Revolution and volunteered for the Easter Seals board. She was employed by the River Gas Company prior to becoming a full-time homemaker. While working at the River Gas Company, she was elected as the Marietta Regatta Queen. Luada was Catholic by faith and will be deeply missed by her loved ones, including seven children: daughter Anne Keegan (Joseph); son Joseph Henry II (Kathryn), all of Marietta; daughter Catherine Whelchel (Richard) of Spartanburg, SC; son David (Marcy) of Marietta; daughter Marilyn of Silver Lake, OH; son Michael (Teresa) of Brecksville, OH; son Richard (Ellen) of Los Angeles, CA; 19 Grandchildren: Jennifer Bird (Andy), Nathan , Benjamin and Megan Keegan, Joseph Henry Wesel III (Kim), Evelyn, Steven, Jackson and Patricia Wesel, Erica Lehnert (J.D.), Catherine Adams, Andrew Adams, Alexander and Olivia Wesel, Ethan and Jason Wesel, Kevin, Emily, and Andrew Wesel, four great-grandchildren: Joseph Henry IV and Cameron Wesel and Catherine and Keegan Bird; brother Cecil Cline and sister Grace Oppe; sisters-in-law Catherine Dickson (Robert) and Mary Agnes Augenstein (Joseph), Sally Wesel; numerous nieces and nephews. She was preceded in death by her husband Joseph H. Wesel in 2016, daughter Lisa Marie in 2002, sisters-in-law, Marie Cline and Mary Lou Wesel, and brothers-in-law James Oppe and Charles (Bill) Wesel. Luada's unique name was the result of her mother's dilemma in choosing to name her daughter after her sister Lu or her sister Ada. Alice resolved this dilemma by combining the two, naming her daughter Luada. Her true joy in life was being the full-time mother to her eight children, raising them and tending to their needs as they grew up on 6th Street in Marietta. For many years she gladly served lunch to whoever would show up at "Lu's Diner." This included not only her husband and adult children, but often other guests including employees and salespeople working with the family businesses (Marietta Ignition, Marietta Automotive Warehouse). Lu's Diner was noted for both its delicious food and plentiful quantity. Luada always played a significant support role for her husband and her children, especially caring for her injured daughter Lisa in the home for many years. She demonstrated an untiring effort to help her family succeed by always being there for them, and providing love and encouragement through any of life's challenges. Luada's family extends sincere thanks to Dr. Michael Brockett and Dr. Naresh Nayak for their compassionate care in assisting with her health issues. Donations may be made to the Joseph & Luada Wesel Family Foundation for Children of Washington County Ohio or St. Mary Basilica Maintenance Fund, both in care of Marietta Community Foundation. Funeral Liturgy with Mass will be at 10 a.m. Saturday, October 6, 2018, at the Basilica of St. Mary of the Assumption, with The Rev. Msgr. John Michael Campbell celebrating. Burial will follow in New St. Mary's Cemetery. Visitation will be from 2 to 4 and 6 to 8 p.m. on Friday at the Marietta Chapel of Cawley & Peoples Funeral Home, with a Vigil service being held at 3 p.m.

The family of Luada Elaine Wesel created this Life Tributes page to make it easy to share your memories.